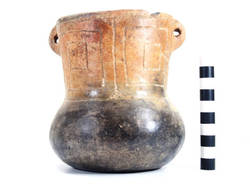 Photo of the actual ceramic image.

NACOGDOCHES, Texas - The Center for Regional Heritage Research at Stephen F. Austin State University has been awarded a $39,600 grant from the National Center for Preservation Technology and Training to digitally preserve and study hundreds of Caddo ceramics obtained from archaeological sites throughout East Texas.

The grant from the funding agency, which is part of the National Park Service, will support the 3-D scanning, processing and analysis of the artifacts, offering researchers unprecedented access to these important historical objects. The images will be stored in an online repository for future research, while the sacred vessels themselves will be returned to the Caddo in accordance with the Native American Graves Protection and Repatriation Act.

Dr. Robert Z. Selden Jr., research associate at the CRHR, said the 3-D images will help researchers and the Caddo themselves learn more about the unique culture, adding that the Caddo are working cooperatively with researchers to preserve this aspect of their history for future generations.

"While the more regularly employed 2-D models have a great practical advantage because they involve less time and digital storage space, they also reduce 3-D objects to 2-D approximations," Selden said. "3-D is preferable since it is more faithful in both form and dimension to the original object."

While previous Caddo ceramic research has focused on classifying the artifacts by motif and design elements, Selden said the current project will allow him and other scholars at the CRHR to delve further into the stories behind the objects' varied shapes.

"By making an effort to continually push beyond documentation, we are effectively making an intellectual investment in altering the current practice of archaeology through providing ourselves and others with the analytical foundation needed to more accurately characterize the dynamic nature of these intellectually valuable artifacts," he said. 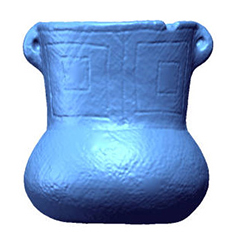