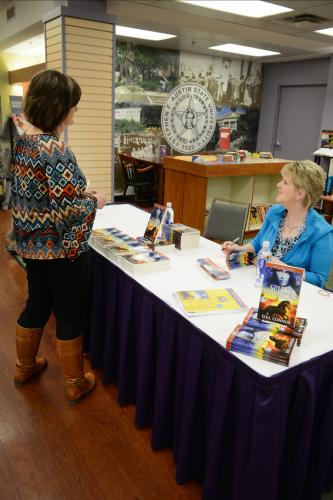 Dr. Della Connor (seated), SFA associate professor of community nursing, visits with a fan of her new book "Spirit Warriors: The Concealing" during a recent book signing at the Barnes & Noble bookstore on campus. Her next book in the "Spirit Warriors" series is due out later this spring.


Nacogdoches, Texas - Dr. Della Connor, Stephen F. Austin State University associate professor of community nursing, is as passionate about her career in the medical field as she ever was. But lately, a long-buried interest has become another big part of her life, and it's something she's waited to see happen for years.

Connor first had the idea to write a book when she was working toward her bachelor's degree in nursing at SFA. After many years with the story's plot hanging around in the back of her mind, "Spirit Warriors: The Concealing" is finally in print and receiving rave reviews from bloggers, readers and critics in the U.S. and abroad.

When she was a student, Connor took the idea to a literature professor at the university, but was told the subject matter was just too dark for a children's novel. The advent of a young-adult genre of books that takes on complex and serious topics - in the vein of "Harry Potter" and "The Hunger Games" - made Connor realize something. "This isn't too dark anymore," she said.

It took two weeks in the summer of 2011 for her to put "The Concealing" together. That was the quick part.

Connor spent the better part of two years trying to get the book published, sending out between three and five letters and copies of the book to publishers a week during that time. The response was always the same, she said: a "horribly discouraging" rejection letter, sometimes indicating that the publishers hadn't even looked at the manuscript.

By chance, Connor's daughter ran into a former SFA student who happened to know someone at a publishing company. Within days after sending the manuscript to the company, the professor was signing a contract for a five-book "Spirit Warriors" series.

The series is based on the exploits of five young adults, described by Connor as "misfits in their own ways," who have the ability to morph their spirits into five different animals. While the characters are gearing up for battle against an evil spirit plaguing a Native American tribe, they also confront wide-ranging topics that children and adults face in real life.

A lot of the inspiration for the challenges her characters face comes from Connor's work in the medical field, she said.

"(Patients') parents bring them to us when they're harming themselves" or are otherwise suffering because they feel ostracized for being different, Connor said. "Hopefully the books bring some solace to kids facing the same problems as the characters in the book."

Children are responding to the book well, Connor said. During a recent tour of bookstores and schools around the state, kids who have read the book flooded her with questions about the story.

The second book in the series, "The Scarring," is expected to be published later this spring, and Connor already is hard at work on the third installment, "The Burning." Now that she's finally broken into the publishing world, the SFA professor says she has no plans to leave it anytime soon.

Once the "Spirit Warriors" series is complete, Connor said she plans to turn to another idea from her past. When her daughter was young, the two had a tradition of making up stories about the life of birds who lived in a birdhouse on their property. Each day they would check on them and construct elaborate fantasies about what the feathered residents did that day. Connor promised her daughter that someday she would turn those stories into a series of children's books. That's a promise she said she plans to keep.