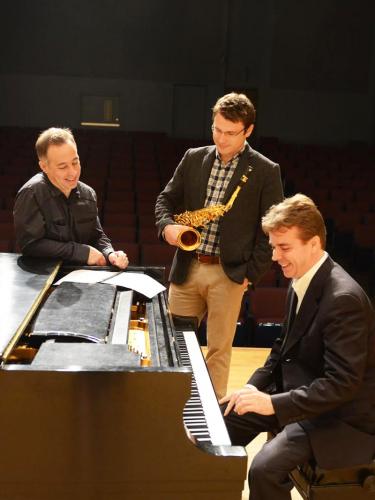 "Outside In - Inside Out," an SFA faculty recital, will feature, from left, Stephen Lias, composer, Nathan Nabb, saxophonist, and James Pitts, pianist, performing at 7:30 p.m. Sunday, April 27, in Cole Concert Hall on the SFA campus.


NACOGDOCHES, Texas - The Stephen F. Austin State University College of Fine Arts and School of Music will present Dr. Stephen Lias, Dr. Nathan Nabb and Dr. James Pitts performing "Outside In - Inside Out," a faculty recital, at 7:30 p.m. Sunday, April 27, in Cole Concert Hall on the SFA campus.

The recital will be comprised of three large works, two of which are world premieres, composed by Lias, who is professor of composition at SFA. Staff pianist Pitts will accompany on two of the program pieces.

"The common thread that runs through the music on this recital is the inspiration drawn from other disciplines in the fine arts," Lias said.

Lias explains that his music reaches into literature, theatre and photography to find universal themes that can be translated into music.

"This process of taking external ideas, internalizing them, and then allowing them to reemerge in a different form is common to both the composer and performer in this case," he said.

The program features "Five Characters from David Copperfield" for saxophone and narrator.

"Each of the five movements in this set focuses on individual fictional characters in Dickens' great novel," Lias said. The selection features Nabb, associate professor of saxophone, on saxophone with Lias narrating.

"Imaginary Folksongs" for saxophone and piano will be premiered in the program. These are six resettings of songs and dances originally written for live theatrical productions, including plays by William Shakespeare, Oliver Goldsmith and Peter Shaffer.

"Ranging from melancholy to boisterous, they explore the indigenous folk music of imagined cultures," Lias said.

"Range of Light" for saxophone and piano will also be premiered. This four-movement sonata is based on Ansel Adams' iconic photographs of Yosemite National Park. Lias has been writing music about the national parks for a number of years.

"Collaborating with composers is always a fantastic experience for performers, but this is a very unique and special situation," Nabb said. "To work with Steve, who is such a fine composer and great friend, makes this all the more enjoyable. I am very excited to give the world premiere of both 'Imaginary Folksongs' and 'Range of Light' on this recital, and am honored these works were written for me."

This premiere coincides with the 50th anniversary of the Wilderness Act, Lias said.

"Imaginary Folksongs" and "Range of Light" feature Nabb on saxophone and Pitts on piano.

Admission to the recital is free.