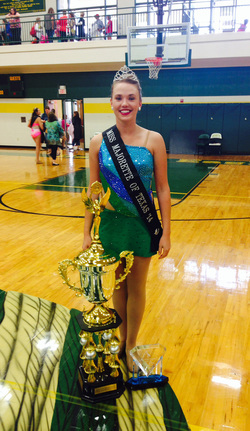 But Elder considers her recent selection as College Miss Majorette of Texas "the greatest and most significant title up to this point."

"This is my last competition season," said the Stephen F. Austin State University senior from Kilgore, "so saying I wanted to go out with a bang is an understatement."

"This confirms what I, and many others around Shelby, already knew: she is the best collegiate twirler in the state of Texas and, therefore, the nation," said SFA School of Music Associate Director of Bands Dr. David Campo, who is also director of the Lumberjack Marching Band. "This is a tremendous honor for her and great recognition for her tremendous work ethic and artistry. She is an outstanding representative of SFA."

Twirling since she was 9, Elder switched coaches after her freshman year in high school, and that's when she "really started pursuing twirling as my passion and dedicated my time and efforts to becoming prepared for feature twirler try-outs and competing nationally," Elder said.

To win the College Miss Majorette of Texas, competitors are required to model, interview and perform a solo and strut for up to eight different judges. Then, all of the scores are calculated to indicate the pageant winner of the event.

"In the NBTA world, this is the largest and most celebrated of wins, and up until this last state contest, I had placed second six times in pageant," she explained. "I was completely and absolutely shocked that my name was announced for first place."

"Competitors at this level are well accomplished and usually feature twirlers and nationally recognized performers," Elder said. "So winning the title of College Miss Majorette of Texas and Collegiate Twirl Champion at this past contest means the world to me. I have spent countless hours in practice and lessons, dedicated a majority of my life to the advancement of this sport, and trained for years with an amazing coach to push me beyond my limitations. I've worked with my mom in the gym to fine tune every detail, all for the pursuit of becoming my personal best."

Elder is also a coach herself, instructing students at state, regional and national levels.

"So it really means a lot to me to be able to share a part of my success and excitement with them," she said, adding that she hopes to use her accomplishments as examples to "help motivate each student to continue to strive to reach to the next level."

Elder said much of her success should be credited to her mother.

"My mom is a huge part of my success and has been with me every step of the way," she said. "She practiced with me every day in high school and drives down to SFA once or twice a week to practice with me. Many people have contributed to my success, but nothing has been more meaningful than the relationship my mom and I have built through the love of a sport.

"Twirling is a solo sport in the aspect that one person is seen on the floor or football field," Elder said. "But there is no doubt that twirling involves teamwork."

"I couldn't have asked for a better band director, band and school to represent," she said. "I tell everyone that SFA is feature twirler heaven. Twirling under Dr. Campo has been a dream, and having his support from day one has not only made my journey much more enjoyable but also has provided me with so many opportunities.

"I have the honor to practice and perform with the LMB (the best band in Texas) and, for a feature twirler, had the opportunity to perform in some of the neatest places in Texas and the world," she said. "The 50-yard line on the football field is my home, but topping it off with the London New Year's Day Parade was perfect!"

"Shelby continues to bring positive attention to our university and marching band and will represent us in the Macy's Thanksgiving Day Parade as she did in London," Campo said.

Elder is a cellular and molecular biology major with a minor in combined science and mathematics and a second minor in American Sign Language, deaf and hard of hearing. She plans to attend dental school and just completed her application for this year's matriculation cycle.

"I always plan to give back to the world of twirling and to the sport that has given me so much," she said. "Who knows exactly what my life holds for me, but with the people I have in my corner supporting me and the life skills twirling has impressed upon me, I know I have been well-equipped for my future."