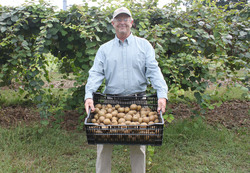 Dr. David Creech, professor emeritus of agriculture and associate director of SFA Gardens, with a selection of what is believed to be Texas' first kiwifruit crop. The fruit are the result of the first field trial conducted outside of Auburn University to test the performance of two patented kiwi varieties that are the result of collaboration between Auburn and Hubei Academy of Agricultural Sciences' Institute of Fruit and Tea in China.

NACOGDOCHES, Texas - SFA Gardens at Stephen F. Austin State University has produced and harvested what is believed to be Texas' first kiwifruit crop. This is the first field trial conducted outside of Auburn University to test the performance of two patented kiwi varieties that are the result of collaboration between Auburn and Hubei Academy of Agricultural Sciences' Institute of Fruit and Tea in China.

According to Dr. David Creech, professor emeritus of agriculture and associate director of SFA Gardens, kiwifruit vines are relatively easy to grow, but producing fruit proves more difficult. He points out this is the first successful crop produced since the trial began at SFA three years ago. Much of this struggle lies in the successful transfer of pollen from male to female kiwifruit plants. Creech explained that even if the female plants are fertilized, the success and size of the fruit produced rely on the amount of pollen transferred.

"Sure enough, this past spring when they leafed out, we had a heck of a crop of flowers on our pollinators, and it happened to coincide with the time of the flowers on the female variety, Golden Dragon," said Creech. "We ended up with a pretty good crop, about 140 pounds from eight vines."

Creech's friend Dr. Jay Spiers, associate professor of horticulture at Auburn University, has worked with these varieties for more than 10 years. The fruit produced do not share the appearance of the typical fuzzy-skinned, green-fleshed kiwi purchased at a supermarket. These varieties, known as golden kiwis, have a smooth skin and golden colored flesh. According to Auburn University, the varieties trialed at SFA, including the AU Golden Dragon and AU Golden Sunshine, contain antioxidants that provide higher levels of cellular protection than those found in green-fleshed varieties.

While this first crop is promising, Creech said further research is needed to resolve certain production issues. Namely, he is focused on determining why certain male plants suddenly wilt and die to the ground, only to emerge again several months later with vigorous new shoots.

These challenges only seem to invigorate Creech, however. He is focused on the next steps to expand the superior variety AU Golden Dragon, as well as its pollinator, in order to have more plants to trial. He says he is confident that, through the continued partnership with Spiers, they can fine tune kiwifruit production in the coming years.

Though the SFA trial varieties are currently not available for sale, Creech said they will likely be available by mail order next year, providing enthusiastic residents with the opportunity to grow their own. On a larger scale, he also believes kiwifruit have the potential to be a successful cash crop for the state.

"With a little bit of work and some additional research, I think we can have a brand-new fruit crop for Texas," Creech said. 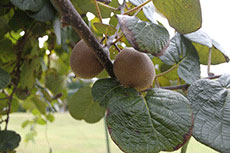 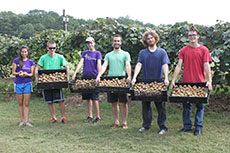