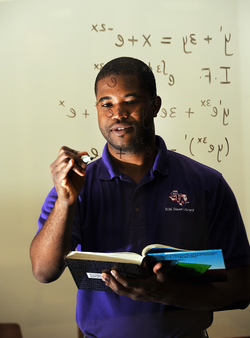 NACOGDOCHES, Texas - It's impossible to say what direction Kerron Joseph's life would have taken if he'd gone to college where he originally planned. But the Trinidadian's academic and professional course veered onto a much different, unexplored path just before he came to the U.S.

When Joseph was finishing up high school in 2006, he had his sights - and scholarships - trained on St. John's University in the concrete jungle of New York City. So when SFA's director of international programs visited him, it took some fast talking to convince him to pay a visit to the Piney Woods of East Texas. He was skeptical but also curious. He'd been to the Big Apple before, but never to the Lone Star State. On a whim, he took the director up on his offer.

Joseph, who is now the science program director in the university's award-winning Academic Assistance and Resource Center, recalls how on that initial trip to SFA, made beneath the broiling August sun, he was struck by how different Nacogdoches was from New York City - and not just the weather. Things moved a lot more slowly here. And then there were the people. "I met friendly people from day one," Joseph said. "That, for me, said something about the place."

It was said loudly enough that Joseph decided to shed his prospective education at St. John's University in favor of one at SFA. He enrolled and soon took a job on campus as a student tutor with the AARC.

AARC Director M.E. McWilliams said that as a student employee, Joseph managed to get certifications and training that were beyond the abilities of most of his tutoring peers. The young East Texas transplant's passion for education was beginning to bloom. What's more, he was good at it. "He distinguished himself," she recalled. "We knew he loved what he did."

In 2009, Joseph completed his Bachelor of Science in mathematics with a minor in finance and took a position teaching math in Nacogdoches ISD, where he was tasked with working with at-risk students. "The students had either given up or just didn't think they could do it," Joseph said of the young people he taught. "We're talking about students other people had written off."

In a Hollywood-esque turn, Joseph proved up to the challenge. His students earned a 100-percent pass rate on state-mandated tests, though he says the students deserve the credit for that success. "I invested a lot of time, but they responded," said Joseph, who completed his master's degree in education at SFA while working for NISD. "It was always about challenging them."

After three and a half years with the school district, the AARC was undergoing some program changes, and Joseph heard about the opportunity to return to his alma mater to work as a director. The decision to leave his students wasn't an easy one. But, in the end, he said he applied the same logic to that problem as he had to those he solved with his students - the same he used when he decided to attend SFA in the first place. "It was a tough decision to leave, but I see it as another opportunity to challenge myself. It's what I'd been asking my students to do all along."

He accepted the position of AARC science program director in October 2013 and immediately began addressing some of the challenges there, McWilliams said. He brought a quantitative approach to problem solving that had been lacking before. Now the center has tangible, measurable information it can use to better train tutors, help students, address challenges and leverage successes. It's an approach to problems that could have benefited any number of private businesses or other state institutions.

"He could have done many things, but he chose to do this," McWilliams said. "That's one of the things that sets SFA apart from many other universities - how many people come back. We like to bring SFA people back."

Though being a program director is different from working hands-on with students, Joseph said he's enjoying the new challenge. His experience as a former SFA student and student instructor for the AARC is something he continues to draw on to further the center's work.

The reason he chose to return to SFA is simple, Joseph said. "I enjoy teaching. I enjoy seeing that light bulb moment when students finally understand something. I enjoy answering the question, 'Why am I going to use this in real life?'"