SFA to have strong presence at TMEA's state convention 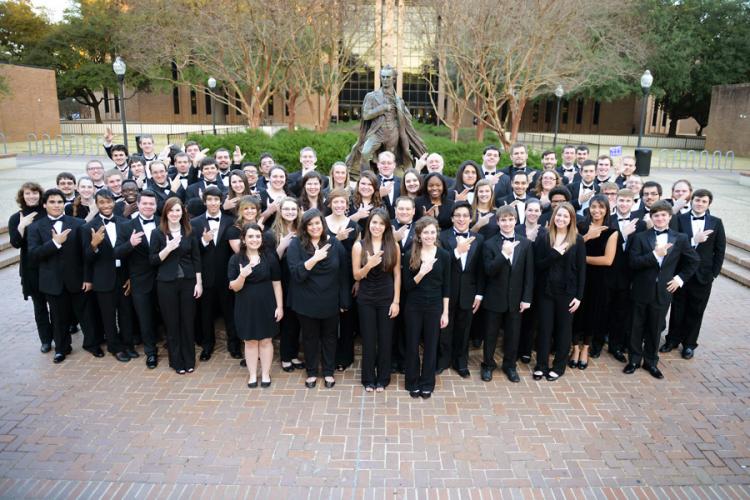 The SFA Wind Ensemble will make its 10th appearance performing before the Texas Music Educators Association's annual clinic/convention scheduled for Feb. 12 through 15 in San Antonio.


NACOGDOCHES, Texas - The Stephen F. Austin State University School of Music will showcase the talent and expertise of its students and faculty in a number of ways at the 2014 Texas Music Educators Association Convention in mid-February in San Antonio.

When the SFA Wind Ensemble performs at TMEA, it will be for the 10th time, with five of those appearances under the direction of Fred J. Allen, director of bands at SFA for the past two decades.

"It is an honor to perform at TMEA," Allen said. "This concert gives us exposure to band directors throughout Texas and gives us a chance to show the rest of the state what we are doing musically at SFA."

It also gives former Lumberjacks who have gone on to pursue careers in music education a chance to hear a performance by one of the premier ensembles from their alma mater.

"Many of our alumni teach far enough away that they do not get to come hear the band on campus," Allen said, "so TMEA is one of the only opportunities they have to hear the band perform."

Another highlight for SFA alumni attending the TMEA event this year will be seeing one of their former and beloved directors back in action. Melvin B. Montgomery, director emeritus of the SFA bands, will guest conduct "Man of the Hour" march by Henry Fillmore at the concert in San Antonio.

"His alumni will be thrilled to see him on the podium again," Allen said. "He served as director of bands from 1968 through 1986 and will be warmly received by his former students and all his friends in the band world."

The Wind Ensemble's performance at TMEA will feature both older and newer works, which is what TMEA attendees expect from these concerts, Allen said.

"They want to hear a mixture of known compositions with some new things thrown in," he said. "This concert will be the first time many in our audience will have heard the three newer works. The composers of the newer pieces will be in attendance at the concert."

Meyer, director of percussion studies at SFA, will present two clinics at TMEA. "The first clinic, 'Creating an Online Presence for Your Program,' will discuss several ways directors/instructors can attract new and talented students, as well as get current students more actively involved in their music programs by utilizing online programs and services," he said. "The second clinic, 'Easily Adding Technology in Lessons and the Rehearsal Room,' will cover over a dozen highly-effective, music-oriented applications I use in my daily lessons and rehearsals."

Scott, who is associate professor of trombone at SFA, will host a session in which she shares her teaching tips for helping trombone students improve their intonation, tone and technique.

The clinic/convention is Feb. 12 through 15 in the Henry B. Gonzalez Convention Center, San Antonio.