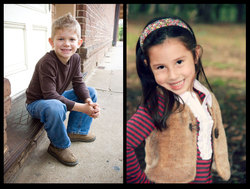 Austin Smith (left), son of Ted and Hollie Smith, and Alaina Cordova (right), daughter of Keith and Amanda Cordova, will serve as the 2014 Stephen F. Austin State University Children of the Court during the annual celebration Oct. 24 and 25.

Nacogdoches, TEXAS - Austin Smith and Alaina Cordova, both natives of Nacogdoches, will serve as the 2014 Stephen F. Austin State University Homecoming Children of the Court during the annual celebration Oct. 24 and 25.

Austin Gammel Smith is the 7-year-old son of Ted and Dr. Hollie Smith. Ted, a 2007 SFA graduate, is the director of athletic development at SFA. Hollie earned SFA degrees in 2000 and 2002 and serves as the assistant dean of student affairs for programs for the university. Austin's grandparents are Hollace Banks and Michael Gammel of Pittsburg, Texas, and Judy Sleyko and Ted Smith of Houston. Austin is a first-grader at Central Heights Elementary School and is active in the Grace Bible Church AWANA program. Just like his parents, Austin's favorite color is purple. He enjoys playing little dribblers basketball and youth baseball, hunting with his dad, eating apples, doing math problems, and attending SFA athletic events. Austin plans on attending SFA in 2026 to become a dentist. His favorite Lumberjack is basketball player Jacob Parker.

Alaina Kate Cordova is the 6-year-old daughter of SFA college sweethearts Keith and Amanda Cordova. Keith, a 2000 graduate of SFA, serves on Cordova Construction Company Board of Directors. Amanda earned SFA degrees in 2002 and 2004 and is a licensed professional counselor supervisor for Nacogdoches ISD's Student Services Department. Alaina has a 3-year-old brother named Reese and is the granddaughter of Tommy and Margaret Cordova and Stephen and Cindy Price. Alaina attends Kindergarten at the SFA Charter School and loves being a Junior Lumberjack. She also is a member of First United Methodist Church and enjoys dance, gymnastics, art projects, reading and riding her bike through the SFA Gardens. Alaina has a passion for helping others and plans to focus a career on a profession that encourages and comforts those in need.

Austin and Alaina will ride in the Homecoming parade, as well as assist Dr. Baker Pattillo, university president, in the crowning of the Homecoming queen and king during halftime of the SFA vs. Southeastern Louisiana football game. Kickoff is at 3 p.m. Saturday, Oct. 25, at Homer Bryce Stadium.