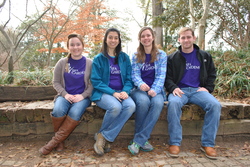 SFA Gardens Research Associate Dawn Stover attended this year's conference with the team. "I am proud of how these students represented SFA horticulture," she said. "For them to come home with these honors is a testament to the caliber of students and the quality of education we have at SFA."