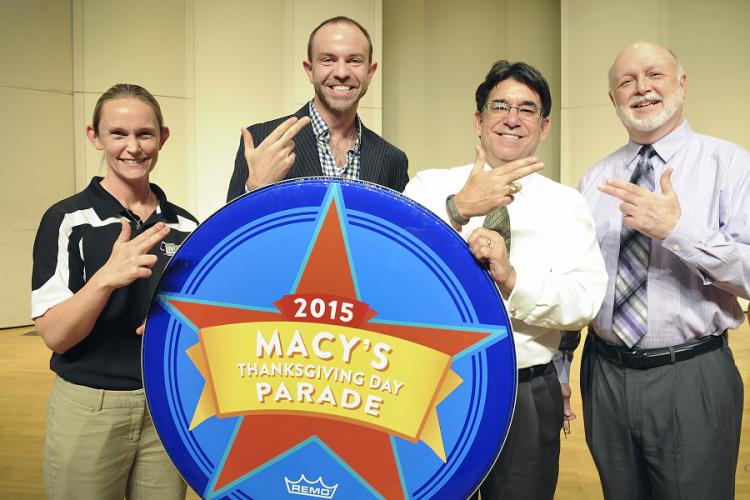 
NACOGDOCHES, TEXAS - For more than 90 years, the words "Let's Have a Parade" have signaled the beginning of the Macy's Thanksgiving Day Parade to revelers along the streets of New York City and tuned in around the world. In November 2015, those watching the event will hear the boldest sound from the oldest town - the Stephen F. Austin State University Lumberjack Marching Band.

The band will take SFA's purple and white to the streets of the Big Apple for the parade on Nov. 26, 2015, the event's organizers announced Tuesday.

The 'Jacks are one of four university bands chosen from more than 175 bands considered to march the 2.5-mile route, said Wesley Whatley, creative director for Macy's Thanksgiving Day Parade.

SFA Band Director Dr. David Campo said the opportunity for the band to march in the parade is an "incredible honor."

SFA President Dr. Baker Pattillo said the Lumberjack Marching Band's history of pride, talent and excellence is sure to impress those watching the annual celebration.

"The band is one of the most beloved and enduring traditions we enjoy at SFA, and the 'Boldest Sound from the Oldest Town' has provided a spirit-filled soundtrack to most of our university's proud 90-year history," Pattillo said. "Whether it be an exciting halftime show for football fans at Homer Bryce Stadium or a march down the streets of New York City, the Lumberjack Marching Band's talented members consistently represent SFA with a combination of musical talent and school spirit that is second to none and never ceases to astound me."

Jonathan Aviles, a junior and the band's operations manager, isn't daunted by the challenge of organizing such a monumental trip. In fact, he said he's looking forward to putting the pieces in place that will carry the Lumberjacks to New York.

Alexia Guilbeau has been with SFA's Twirl-O-Jacks program for the past five years and doesn't doubt the band's ability to represent the state of Texas in this venue.

"We're going to have to be very prepared, but I'm not worried," she said. "It's no problem and it'll be a great experience. The opportunity to be on this big a stage is something else."

Though the band has 18 months to prepare, there will be a constant reminder in the band hall to keep the musicians on their toes. A special Macy's Thanksgiving Day Parade 2015 drum head was presented to the organization Tuesday during the announcement.

The 'Jacks have traveled far while representing the school, including a trip to London in 2013. Dr. Manny Brand, director of the School of Music, said this is another opportunity for SFA to show its worth on a grand scale.

"It is a monumental announcement that reflects what we all know and believe - we are one of the finest schools of music in the country," he said. "I particularly want to thank the non-music majors. We talk about the music majors all the time, but non-music majors also make our marching band successful. "

Established at SFA more than 80 years ago, the Lumberjack Marching Band includes approximately 250 members each year performing both corps- and military-style marching genres.