SFA music students' compositions are performed around the world 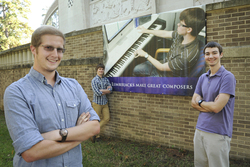 NACOGDOCHES, Texas - Three composition students in the Stephen F. Austin State University School of Music are making names for themselves in the realm of professional composing and putting SFA in the spotlight in music venues around the world.

Ian Deterling, a first-year graduate student from Poplar, Wis., and student of Dr. Stephen Lias, Frank Sartain, a Houston junior and student of Dr. Charles Halka, and Kyle Henkel, Argyle sophomore and student of Dr. Alan Scott, are enjoying having their compositions performed in prestigious competitions and locations. It's recognition that's not only important to the students, but also to the university, as well.

"There has never been a better time to be studying composition at SFA," said Lias, professor of composition. "We have the largest group of talented students and teachers that this university has ever seen, and each time something like this happens, it only further solidifies our growing reputation."

"This type of recognition shows that it isn't necessary to go somewhere like Juilliard or Curtis in order to contribute actively to the international music and composing community," said Halka, composition faculty. "In fact, I would say that because our students don't have the automatic advantage of being tied to a household name like those schools, they stand to learn even more about reaching out professionally, making their voice heard, and making their music the best it can possibly be."

Henkel's piece, "Silence in the Forest that Weeps," was performed Oct. 26 in St. Petersburg, Fla., by the Traveling Circuits in their concert "New Music on a Sunday Afternoon."

"This was my first-ever public performance of one of my works, so I was ecstatic," Henkel said. "The title was inspired from the loss of my dog. After his passing, I went to a woody area, just trying to clear my mind. And it was just so quiet, so peaceful. I could hear this little melody in my head and quickly wrote it down."

Sartain's composition, "Epic Journey," was inspired by one of his favorite movies, "Braveheart," about Scottish warrior William Wallace who encourages his fellow Scotsmen to fight the English for their freedom.

"My piece focuses on his life as a rebel against the English," Sartain said. "It's a very rewarding and exciting privilege to have my composition performed."

It was performed Nov. 21 at the Brand New Music for Winds concert in London, England.

Deterling's Duet in F Minor for Bass Trombone and Violin, performed Sept. 18 in Norwich, England, is a three-movement work commissioned by friends originally as a piece for bass trombone and viola then arranged for bass trombone and violin. Deterling said his friend asked him to write the duet "reminiscent of works from the Classical and Romantic periods." So he drew from compositional techniques from symphonies they both admired by Pyotr Ilyich Tchaikovsky, Ludwig von Beethoven and Franz Schubert.

"What I value even more than performances is how performers and listeners respond to my music," Deterling said. "I'm thrilled that I've been contacted by people - professional musicians, music teachers and students, hobbyists - from all over the world asking about the piece … a session violist from Los Angeles, a violist from the National Taiwan Symphony Orchestra, a solo violist from South America, and various music teachers and students from England, Central Europe, Canada and the United States."

These successes provide encouragement and inspiration to other students, their teachers agreed, and it "speaks to SFA's commitment to prepare students solidly for competitive job markets," Scott said.

"Composition forms a relatively small working community as the scale goes," he said, "and meeting these successes at an early stage of a student's career can be an indicator of future achievements, both individually and within the studio group.

"With the tendency to be very media-connected, word spreads quickly, and receiving recognition can become an encouragement for those looking toward composition as a profession," Scott said. "Prospective students want to be involved in a studio that's active and doing great things."

"When we interview aspiring composers, they often don't actually know what sorts of successes are possible for them," Lias said. "It is really helpful for us to be able to hold up our own students, some of whom are only a year or two out of high school, as examples of what can happen."

"We encourage all our students to get their work out there into the real world as much as possible," Halka said, "and Kyle's, Ian's and Frank's success is also a success for the entire SFA composition studio.

"Dr. Lias, Dr. Scott and I work hard to challenge students, help them discover new ways of thinking about music and composing, and guide them during their entry into the professional world of composition," he added. "But ultimately, our efforts would be in vain were it not for the talent the students already bring with them to SFA."