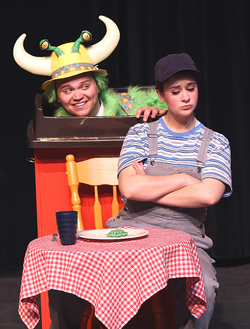 "The Monster Who Ate My Peas" will be presented in two performances at 9:30 a.m. and 12:30 p.m. Wednesday, Dec. 10, in W.M. Turner Auditorium on the Stephen F. Austin State University campus as part of the SFA Children's Performing Arts Series.

NACOGDOCHES, Texas - The Stephen F. Austin State University College of Fine Arts and the Children's Performing Arts Series will present "The Monster Who Ate My Peas" in two performances at 9:30 a.m. and 12:30 p.m. Wednesday, Dec. 10, in W.M. Turner Auditorium on the SFA campus.

This musical, based on the book written by Danny Schnitzlein and illustrated by Matthew Faulkner, tells the funny story of a young boy who doesn't want to eat his peas, according to Diane Peterson, SFA Fine Arts Box Office manager and coordinator of the children's series.

"When a monster appears underneath his kitchen table, the boy is ready to make a deal with the monster," Peterson said. "If the monster eats his peas, the boy will give the monster any of his possessions. When the monster raises the stakes, will the boy face his own fears?"

ArtsPower presents this touring production, which targets children in pre-kindergarten through third grade.