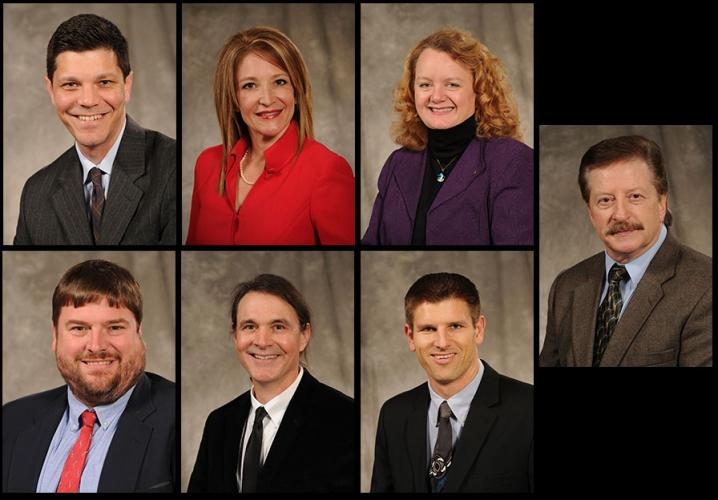 
NACOGDOCHES, Texas - Seven Stephen F. Austin State University faculty members will be honored for their teaching abilities at the annual Teaching Excellence Convocation beginning at 3:30 p.m. Wednesday, April 16, in Regents' Suites A and B of the Baker Pattillo Student Center.

The Teaching Excellence Awards were established in 1994 to honor outstanding classroom teachers at SFA. Each of the university's six colleges selects a member of its faculty to receive the annual award based on knowledge of subject matter, quality of lectures and assignments, enthusiasm for teaching, interest in and availability to students, commitment to continuous improvement, and contribution to the quality of teaching within SFA by assisting and encouraging other faculty members.

Nelson Rusche College of Business
Dr. Stephen Kosovich joined the Rusche College of Business in fall 2005 after earning master's and doctoral degrees in economics from the University of Oregon and a bachelor's degree in economics from Willamette University. Since then, he has primarily taught undergraduate courses in economics, including Principles of Microeconomics and Macroeconomics, Labor Economics, and Sports Economics. Kosovich's primary research focus has been on understanding the impact of job losses on workers. He also has collaborated with several students to research such diverse topics as faculty labor supply, student class demand, local economic development policies and the economics of college athletics.

James I. Perkins College of Education
Dr. Jannah Nerren is an associate professor of early childhood education. She joined the Department of Elementary Education faculty in 2006 after teaching in elementary and early childhood settings. She completed both her bachelor's degree in elementary education and her master's degree in early childhood education at SFA, and her doctoral degree in education at Capella University, Minneapolis. She currently serves as the program coordinator for the Early Childhood through 6th Grade Teacher Certification Program. She involves her students in research regarding indirect language stimulation techniques for English Language Learners and the impact of mentoring for children from poverty.

College of Fine Arts
Professor Angela Bacarisse received her Master of Fine Arts in theatre design from the University of Memphis and her bachelor's degree in theatre from the University of Delaware. She has been on the faculty at SFA since 2001, and she specializes in clothing history and design for the stage. Her research and innovations in tailoring men's 18th-century clothing have been presented at the United States Institute for Theatre Technology, as well as her designs from several SFA Theatre productions. Professional and university design credits include costumes and lighting for theatre, dance and opera companies from New England to Texas, including The Texas Shakespeare Festival and the Appalachian Summer Repertory Theatre. She also has worked as a costume technician at theatres such as the Alley Theatre in Houston and on the movies "Great Balls of Fire," "Hearts of Dixie," "Ace Ventura: When Nature Calls" and the television show "Elvis: Good Rocking Tonight."

Arthur Temple College of Forestry and Agriculture
Dr. Matthew McBroom joined the Arthur Temple College of Forestry and Agriculture in 2006 after earning his Ph.D. in forestry from SFA. His bachelor's and master's degrees in forestry also were earned at SFA. His specialization is water resources and hydrology, and he teaches several related classes in forestry and in the Division of Environmental Science. He has supervised five master's theses and currently has three doctoral and five master's students working on a variety of water resources issues ranging from water quality to river and reservoir management. He received the National Young Forester Leadership award from the Society of American Foresters in 2010 and the Research, Development and Innovation Award from the Texas Forestry Association in 2013.

College of Liberal and Applied Arts
Dr. Jeff Roth is from Arlington, Texas, and he earned a bachelor's degree in criminal justice from SFA. He became a certified police officer and worked in law enforcement until entering graduate school. Roth returned to SFA and earned a master's degree in history, taught history and then worked as a research specialist for the Center for East Texas Studies and the Stone Fort Museum. Roth continued his graduate work at the University of Oklahoma where he earned a Ph.D. in geography and completed his formal education at the University of Denver Sturm College of Law with a Master of Resources Law Studies. He returned to SFA as a member of the faculty in 2007, earned tenure in 2013 and continues as an associate professor of geography. Roth is an active faculty adviser for Geography Club and SFA's Association of Home Brewers. His research interests include limited resource agriculture, Black Texans before 1865 and ecology within the Rio Grande basin.

College of Sciences and Mathematics
Dr. Keith Hubbard joined the Department of Mathematics at SFA in 2005 after earning his doctoral degree in mathematics at the University of Notre Dame, specializing in vertex operator coalgebras. He earned his bachelor's degree in mathematics at Point Loma Nazarene University. Hubbard's research now focuses primarily on mathematics education, and he currently serves as co-primary investigator and project director for the National Science Foundation-funded Talented Teachers in Training for Texas program and on the Mathematics Association of America's Committee on Articulation and Placement. He also is initiating a Science, Technology, Engineering and Mathematics (STEM) Residential Learning Community at SFA this fall.

Adjunct Teaching
Keith R. New joined the Department of Business Communication and Legal Studies as an adjunct faculty member in 2009 and began teaching Business Communication, Business Ethics and Society, and Human Resource Management courses at the undergraduate level. He received his bachelor's degree in English from SFA and Master of Business Administration from Texas A&M University. New's 25 years of private-sector management experience, including time with two Fortune 500 companies, provides him with industry-related examples that apply the theories of business communication, business ethics and human resources and allow him to share the principles of the disciplines in a manner that resonates with his students.