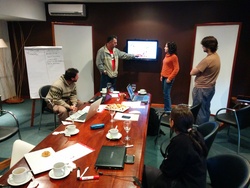 Biologists from Argentina, Brazil and Paraguay met in Misiones, Argentina, in June to assess the correlation between the existing habitat and the need for the Jaguar Credits program. Photo credit: Dr. Daniel Scognamillo

Two professors from Stephen F. Austin State University's Arthur Temple College of Forestry and Agriculture are addressing the drastically dwindling populations of jaguar in Argentina and the socio-economic issues faced by landowners in the province of Misiones.

Dr. Daniel Scognamillo, associate professor of wildlife ecology, and Dr. Gary Kronrad, Bone Hill Distinguished Professor and forest economist, are providing landowners with incentives to conserve and improve the habitat of the jaguar, a species that once ranged from southeastern Argentina to the southern United States.

Scognamillo said the project evolved as they became increasingly aware of the challenges facing landowners in the region. The professors realized their work would need to be much broader than initially planned.

If conservation efforts disproportionately focus on preserving the habitat for the jaguar, Scognamillo said, landowners who rely on the forests for agriculture-based jobs will suffer. The same can be said of jaguars if the emphasis is placed solely on ensuring a thriving forest-based economy. The key is finding a location along the spectrum in which ecological and economic issues find equilibrium, he said.

"We decided if we were going to try to tackle the problem we had to come up with a new idea, something that has not been tried before," Kronrad said.

From this research, the Jaguar Credits Initiative was born. Through this program, corporations can pay landowners to invest in the implementation of management plans that will improve their land and foster the development of wildlife habitat. In return, the investing businesses can feature a Jaguar Credits logo on their products, informing consumers of their conservation efforts.

In 2013, the SFA professors presented their ideas to Argentina's Minister of Ecology and Secretary of Forest Development. This subsequently led to the professors meeting with legislators, as well as the province's largest timber company.

This June, Scognamillo and Kronrad spent two weeks in Argentina with top jaguar scientists from Argentina, Brazil and Paraguay. The group developed a matrix to assess the quality of existing habitat as a baseline for assigning future credits. Both professors emphasize the importance of collaboration with local scientists, saying the partnership not only provides a deeper, more nuanced understanding of regional factors that must be addressed but also establishes confidence among the citizenry.

The long-range goal is to implement the initiative throughout the jaguar's native range. The professors said the initiative's role as a conservation program and economic development project has the potential to improve the lives of many rural landowners.

When speaking about the project, Scognamillo, a native Argentinian, maintains a cautious enthusiasm.

"When I was working in this area 20 years ago, the number of jaguars estimated for this area was close to 150. Now it's 35," he said. "This might not be the answer, but we feel confident that it will help."