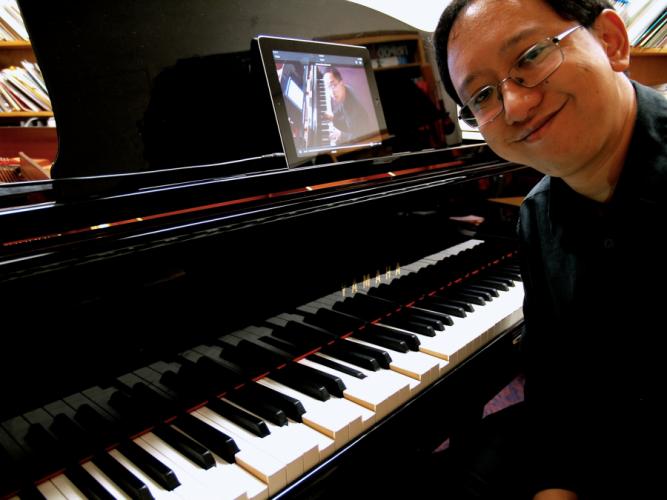 Dr. Mario Ajero, associate professor of piano pedagogy at SFA, is considered a pioneer in the use of Yamaha's Disklavier technology in music education. SFA's School of Music is one of the first institutions in the country to participate in Yamaha's Disklavier Education Network (DEN) and is accepting recorded auditions using the technology from recording sites across the United States.


NACOGDOCHES, Texas - The Stephen F. Austin State University School of Music is one of the first institutions in the country to participate in Yamaha's Disklavier Education Network (DEN).

DEN is an ambitious web initiative poised to change the way in which schools, educators and students collaborate with each other, conduct master classes over the web and audition students, thanks to the company's Internet-connected reproducing piano, according to Dr. Mario Ajero, associate professor of piano pedagogy at SFA.

"We are now accepting recorded auditions using Yamaha Disklavier technology from recording sites all over the United States, including Hawaii and Alaska," Ajero said. "We believe this has tremendous potential to reach out to piano students that ordinarily would not be able to come audition live at SFA."

The world's first online college piano audition program replicates an in-person performance, Ajero said. Working in partnership with 17 community colleges and universities along with 27 audition sites, Yamaha now offers young pianists the opportunity to record video-synchronized auditions on Disklavier PRO reproducing pianos that are shared with college admissions and scholarship committees over the Internet. At their convenience, audition committees will be able to access these time-shifted performances via the cloud, watching the students play on a large screen while their own piano reproduces these performances as though the student was in the room.

Some of the premier music programs in the country are already participating in the Disklavier College Audition program, Ajero said, and leading educators are hailing its advantages both to work with students via remote instruction as well as to provide an unprecedented remote audition process for potential students that parallels an in-person performance.

"Our school, for instance, is in rural east Texas, a two-to-three hour drive from the nearest major airport, so having the Disklavier's technology really levels the playing field for our school with institutions in metropolitan or other more easily accessible areas in terms of student auditions, lessons and master classes with concert artists who might not otherwise be readily able to work with our students," said Ajero, a pioneer in employing the Disklavier in music education. "Playing the piano is such a complex activity. The fact that this playback technology recreates an entire performance, not just the sound, is truly invaluable for lessons as well as auditions."

In addition to the Audition Program, Yamaha DEN member institutions and individuals participate in long distance lessons, master classes and concert broadcasts and contribute recorded materials, such as instrumental and vocal accompaniments to a community archive, share technical tips and "best practices," and enjoy access to premium support services from Yamaha.

"At our 'One-and-a-Half Pianists' concert last November, my son Antonio and I performed a piece for 8-hands using the same video sync technology behind the Disklavier Education Network Auditions," he said. The video of that concert can be viewed at http://www.youtube.com/watch?v=_Tda3Wbnv6s.

Last year, SFA successfully received two live broadcasts via DisklavierTV from a concert by Sarah McLachlan and a concert featuring Elton John where their piano playing was reproduced on the Yamaha Disklavier piano.