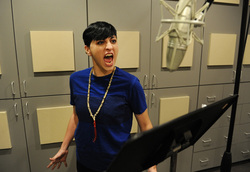 SFA student Molly Dyer, a senior from Copperas Cove, howls a battle cry as the character "Rinalda, the mad minstrel" in the School of Theatre's sound lab during a recording of the radio play "The Phoenix on the Sword."

NACOGDOCHES, Texas - Students in the Stephen F. Austin State University School of Theatre are trained to be stage actors in addition to stage managers, technical directors and costume, lighting and sound designers. But a recent radio play project gave select students a different kind of experience before an audience who will "see" the play through the imagery they created behind a microphone instead of on a stage.

"The Phoenix on the Sword" is the first short story in author Robert E. Howard's "Conan the Barbarian" tales, the stories that would later lead to the famous feature film franchise, comic books, toys and video games, and made actor Arnold Schwarzenegger a household name, according to Zach Hanks, assistant professor of theatre at SFA and director of the radio play.

In "The Phoenix on the Sword," Conan has usurped the throne of Aquilonia, and must defend his crown from assassins and the evil sorcerer Thoth-Amon (a recurring villain of the saga), said Hanks, who described acclimating the student talent to the radio medium as one of the main challenges of the production.

"Theatre majors are primarily trained for the stage, with little experience acting for recorded media, such as radio or film," he said. "Microphones and cameras are ruthlessly unforgiving of fakery. A false moment or an insincere line-reading that is excusable from 50 feet away in a large theatre is embarrassingly obvious when the mic is only eight inches away."

"The Phoenix on the Sword" features SFA theatre majors John Brokaw as Conan and Thoth-Amon, and Molly Dyer as the narrator, and includes performances by Valarie McLeckie, Lincoln Smith, Noah Scheibmeir, Ashe Vernon, Nnamdi Nwankwo and Michael Spencer. Amanda Warren is sound designer, and Jessica Skidmore is editor/mixer. Hanks makes a brief cameo as "the creature."

Hanks is uniquely suited for this kind of production. The bulk of his professional career has been as a voice actor and director, primarily in video games. He has directed dialogue for about a dozen interactive games, most notably "Saints Row," "S.T.A.L.K.E.R.: Shadow of Chernobyl," and the "Company of Heroes" and "Warhammer 40,000: Dawn of War II" real-time strategy franchises.

"I've voiced close to 100 interactive games and animated series, though I'm best known as 'Garnac,' the antagonist of the two-part Season 3 finale of 'STAR WARS: The Clone Wars,' and as 'Capt. MacMillan' from 'Call of Duty 4: Modern Warfare.'"

Hanks described "The Phoenix on the Sword" as "low fantasy," which is a common video game genre. He directed the actors almost exactly the same way he would if he was directing Hollywood voice talent for a triple-A interactive title.

"The fact that I'm a life-long 'Dungeons & Dragons' player also didn't hurt, as the story reads much like a good game of 'D&D' plays, and Robert E. Howard was one of the authors who inspired the originators of 'D&D' in the 1970's," he said.

Lead actor Brokaw was amazed at how different performing a radio play can be as opposed to a stage performance.

"When you're on stage, you really have to focus on what will 'read' to the audience, and most importantly, if you'll be heard," he said. "When you're behind the mic, you're really free to explore; you can be as quiet or as loud as you want and alter the qualities of your voice to whatever you wish. There is always someone there to adjust the mic levels to your choice, as well as give you instant feedback on your performance."

Brokaw said many stage actors are trained to "hit every consonant and every syllable of every word," but that's not necessarily the case with radio plays.

"So needless to say, that followed me into the sound studio, and it really became a matter of teaching myself to speak like a person, despite the heightened language and otherworldly voices I was doing," he explained.

The project has given him a taste of yet another aspect of acting, and he's eager to do more.

"The Phoenix on the Sword" will premiere at 7 p.m. Wednesday, June 11, on KSAU 90.1, SFA's radio station, with other broadcasts to include 5 p.m. Thursday, June 12; 8 a.m. Friday, June 13; and 2 p.m. Sunday, June 15. A podcast goes live at midnight Thursday, June 12, at theatre.sfasu.edu and will be available through the fall semester. An abridged version will be broadcast on Red River Radio.