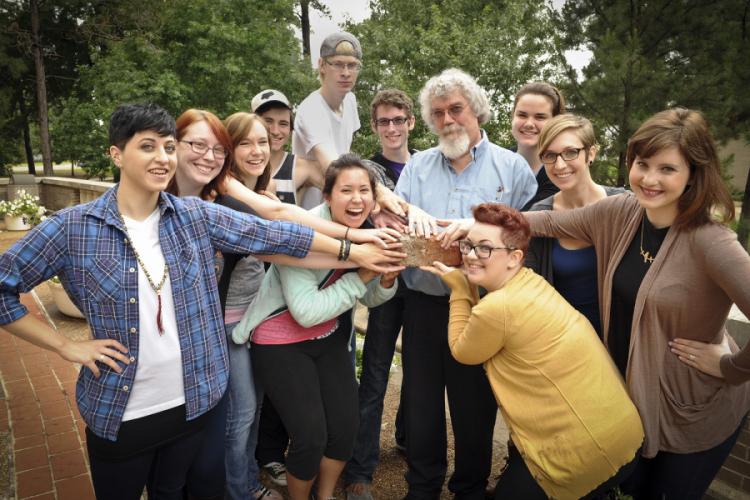 
NACOGDOCHES, Texas - An old red and black speckled brick sits among the papers and notebooks on the desk of Stephen F. Austin State University Professor of Theatre Rick Jones.

It's a great conversation piece, but more importantly, it serves as a reminder for Jones that teaching students the historical importance of Irish Theatre has greater impact in Ireland than in a classroom in Nacogdoches. It also reminds him of the significance of being in the right place at the right time.

The 352-year-old brick is from the original Smock Alley Theatre, constructed in 1662 in Dublin, Ireland, and it was given to Jones four years ago while he was taking a group of SFA theatre students on a tour of Ireland as part of a theatre course he teaches.

Jones was standing outside Dublin's Smock Alley Theatre, the oldest brick building in Ireland and the first purpose-built theatre in the English-speaking world that's still standing. A number of significant events in Irish theatre took place there. Jones was explaining to students its history of becoming a warehouse, then a Catholic Church, then a Viking "adventureland" before its rescue by a cultural trust wanting to restore it back to its theatrical grandeur, when a man who had been seated at a nearby café approached him.

The man happened to be Kristian Marken, the director of the Smock Alley Theatre Studio at the time and manager of the building's renovation. He offered to give Jones and his students a tour of the magnificent building, which was off-limits to the public at the time. The group was so awestruck and appreciative of this one-on-one attention that Marken, who is now director of the Smock Alley Players, gave Jones one of the original bricks.

Those kinds of once-in-a-lifetime experiences make cultural immersion courses invaluable to students, and as a result, another Ireland trip is in store for 11 SFA theatre students in June.

Every other summer since 2006, Jones has taken a Summer I theatre class to Ireland where students see Irish plays performed in famous theatres, tour historic sites, and participate in workshops and seminars with noted artists, scholars and theatre administrators.

"It's an opportunity for the students to see where things happened as opposed to me just telling them," Jones said.

The course begins with two weeks in the classroom where students read plays and Jones lectures on them and Irish history. After that, the group will leave for Dublin and Galway June 8 and return June 25.

"We will see a lot of shows, predominantly Irish plays, as a group," said Jones, whose specialty is Irish theatre, having completed his doctoral dissertation on that subject. "But the students are also required to experience other cultural events on their own time, such as going to art galleries. We will be learning everything we can about the entirety of the culture."