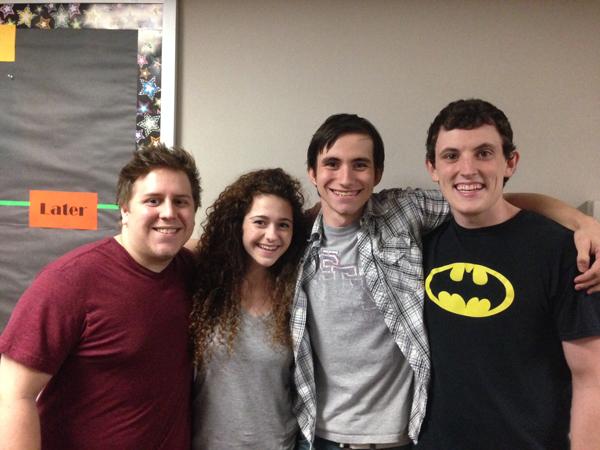 The students, Brandon Hood of Mesquite, Sarah Wisterman of Houston, Gary "Chipper" Morris of Grand Prairie and Cody Davids of Magnolia, performed scenes from various plays as part of the Irene Ryan Competition. Additionally, Wisterman and Morris were specifically invited to perform a scene from "Dead Man's Cell Phone," which was a School of Theatre Mainstage and College of Fine Arts University Series production last fall, as part of a featured night of scenes with the Festival.

The Irene Ryan Scholarship Competition requires the nominees (Wisterman and Davids) to choose a scene partner from their school and prepare two scenes and a monologue, explained Laura Rikard, assistant professor of theatre at SFA. The competition takes place over three days. On the first day, 176 nominees performed. Thirty-two nominees made it to the second round, and 16 were passed on to the finals. Wisterman was awarded fourth place/second alternate for the Irene Ryan Scholarship Award for her work with scene partner Morris. Davids and Hood also gave "a stellar performance," which ranked as the top scene after the first round, Rikard said.

"This is the first time SFA students have had the opportunity to participate in this program, and we are so pleased with the work these students did and how they represented us," Rikard said. "We hope that these are the first of many of our students to be invited to share their work with KC/ACTF."

The Kennedy Center American College Theater Festival is a national theater program involving 18,000 students from colleges and universities nationwide. It has served as a catalyst for improving the quality of college theater in the United States. The KC/ACTF has grown into a network of more than 600 academic institutions throughout the country, where theater departments and student artists showcase their work and receive outside assessment by KC/ACTF respondents.