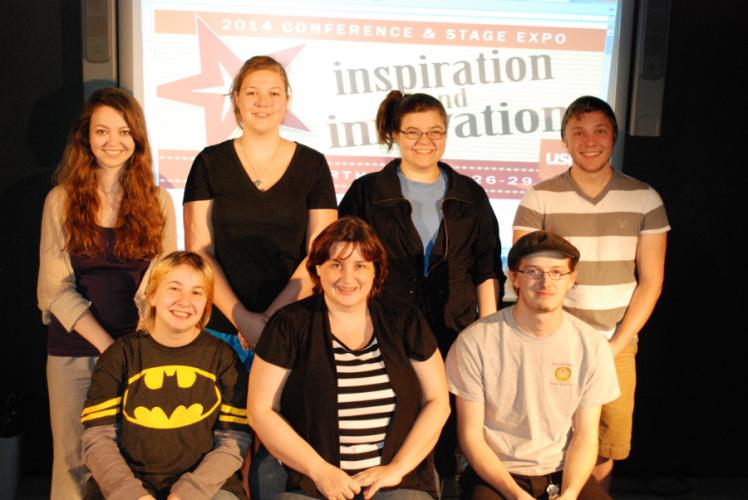 Among those attending this year's conference of the United States Institute of Theatre Technology in Fort Worth are SFA theatre students and faculty, front, from left, Amanda Warren, CC Conn, assistant professor of lighting/sound design, Jason Monmany, back, from left, Austin Holt, Monika Zimmermann, Delia Owens and Troy Carrico.


NACOGDOCHES, Texas - A group of Stephen F. Austin State University theatre students will attend the annual conference of the United States Institute of Theatre Technology where two students will present a special architectural project on which they have collaborated with a former SFA theatre alumnus who is also a theatre consultant of international acclaim.

Students Amanda Warren and Jason Monmaney have been working with Jules Lauve III, 1975 SFA graduate and a principal in Theatre Projects, the largest theatre consulting firm in the world, on a project to renovate the Downstage dressing room in the Griffith Fine Arts Building on the SFA campus. Lauve provided his expertise a few years ago in the renovation of the Upstage Theatre in the same building. The competition is hosted by the American Society of Theatre Consultants and USITT and involves developing an entire consulting plan of a theatrical space, including budget, specifications and drawings, according to CC Conn, assistant professor of lighting/sound design at SFA.

Conn, along with Angela Bacarisse, professor of costume design and arts management, will accompany the students to the conference March 26 through 29 in Fort Worth where they will attend workshops and lectures on theatre education, arts management, costume, lighting, scenic and sound design, makeup artistry, technical direction and other aspects of theatre.

There is also an exposition area where students will get a glimpse of the newest technology and products in the industry. Graduate programs and potential internship opportunities are represented on the expo floor. The students can also get advice on preparing portfolios and meet key people working in the industry and at colleges and universities across the country.

"It is an amazing set of workshops with a lot to learn at all levels," Conn said. "Also, there is an expo floor full of all the new products in technical theatre - light boards, sound boards, make-up, scenic materials, etc. - that they can learn about and use. They can show their portfolios, hand out resumes and network."

"It's just an amazing community of networking theatre people," Bacarisse said. "And the introductions we can make for these students at this event are amazing."

Other theatre students who will attend include Stephen Davis, Bruce Moran, Sarah Hendrix, Devin Bruton, Austin Holt, Monika Zimmermann, Delia Owens and Troy Carrico. Some of the students are working at the conference. Davis, Holt, Carrico and Zimmermann have been accepted into the student volunteer program, which means they serve 15 hours helping run the conference in exchange for free conference passes.

A group of SFA theatre students traveled with Conn to Long Beach, Calif., two years ago to attend the same conference. That year, students Barbara Grimes and Rose Downing entered the first annual Rose Brand Design competition and were on the winning team. Warren has been accepted to participate in this year's competition.

"Students are given a box of materials and a set amount of time and a theme, and they design a display with scenery, lighting and costume (a dressed mannequin) to represent their theme," Conn explained. "It is very fun."

Conn is co-chairing a session called "Color and Collaboration" in which she hosts a panel of scenic, lighting and costume designers discussing the use of color and "how we communicate about our ideas so that we do not work against each other on stage," she said. Conn also volunteers as a portfolio reviewer at the conference, and she will display a poster on her newly developed peer mentoring council within the SFA School of Theatre in the Education Commission's poster session.