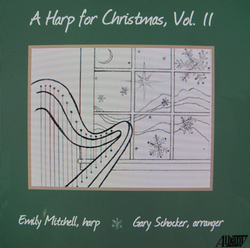 The holiday CD features 21 carols arranged for solo harp by American flutist and composer Gary Schocker. Among the works are "'Twas in the Moon of Wintertime," "Coventry Carol," "Sleep of the Infant Jesus," "Il est né, le dvin Enfant," "Wexford Carol," "Tuscendi dalle stelle," "A la nanita nana," "In the Bleak Midwinter" and "Carol of the Birds." The CD can be ordered through Amazon.com.

For 10 years, Mitchell was principal harpist for the Eos Orchestra in New York City. She also performed with the New York City Ballet and American Symphony Orchestras as well as the Broadway orchestras of "42nd Street," "The Producers," "Thoroughly Modern Millie," "Light in the Piazza" and "Wicked."

She has been on the faculty of New York University and Purchase College and State University of New York, and she has taught master classes at the Royal College of Music in London, Eastman School of Music, Juilliard School and Madrid Conservatory.

Schocker is best -known as the most-published composer for the flute, with more than 200 works in print, primarily with Theodore Presser. He is a world-renowned flutist himself, and studied both flute and piano first with his father and later at the Juilliard School in New York City where he currently lives.

Vol. I of the duo's holiday collection includes such Christmas standards as "Silent Night," "Joy to the World," "What Child is This?" and "Deck the Halls." It also includes "Still, Still, Still," "Infant So Gentle" and "Cind Isus sa Nascut."