SFA's Orchestra of the Pines to present 'Festive Beginnings' 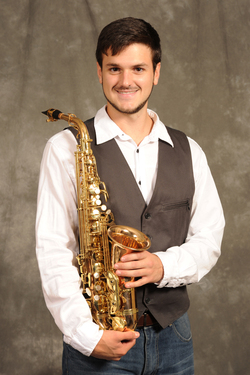 Guest soloist Josh Reyna, senior alto saxophonist from The Colony, to perform with the Orchestra of the Pines in concert at 7:30 p.m. Monday, Oct. 6, in Cole Concert Hall in the Tom and Peggy Wright Music Building on the SFA campus.

NACOGDOCHES, Texas - The Stephen F. Austin State University College of Fine Arts and School of Music will present the Orchestra of the Pines in concert at 7:30 p.m. Monday, Oct. 6, in Cole Concert Hall in the Wright Music Building on the SFA campus.

The program, titled "Festive Beginnings," celebrates a growing music program at SFA with ever-increasing enrollment, according to Gene H. Moon, director of orchestras at SFA.

"The orchestra has reached a new plateau in regards to numbers and performance," Moon said. "It is an exciting time to be a part of the SFA School of Music. We have record numbers in enrollment with a strong undergraduate and graduate student body. The School of Music has exciting ventures under way, and the Orchestra of the Pines is pleased to be a part of the festivities."

The program includes works that were written for special inaugurations, Moon explained. Among the composers whose works will be performed are Johannes Brahms and Antonín Dvorák.

"Brahms composed his 'Academic Festival Overture' as a musical homage to an honorary doctorate bestowed upon him by the University of Breslau in 1879," Moon said. "Dvorák composed his ninth symphony, dubbed 'From the New World,' in 1893 when he and his family first moved to New York. The work embodies his impressions of the New World and the beginnings of his new life in America.

"Both composers experienced festive beginnings that made a profound impact upon their compositions," he said.

Guest soloist will be Josh Reyna, senior alto saxophonist from The Colony.

"His night in the spotlight will surely be the first of many to be a guest soloist with an orchestra," Moon said. "A fine saxophonist, Josh brings fiery technique and passionate lyricism to the instrument in a fine work by David Canfield."