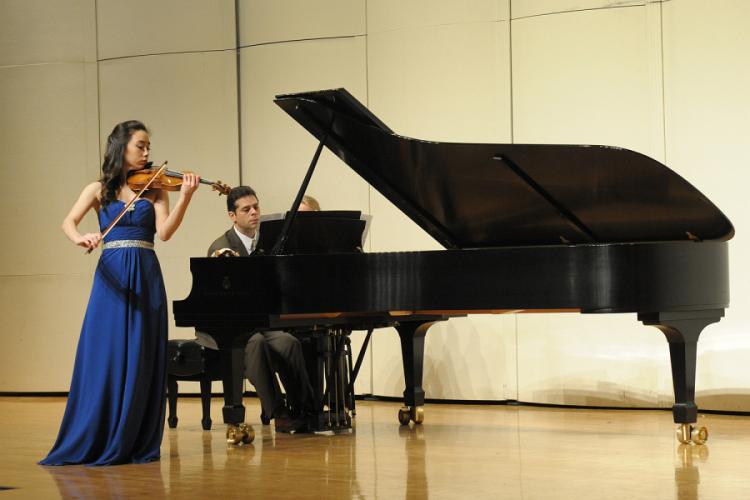 
NACOGDOCHES, Texas - The Schmidbauer Young Artist Competition at Stephen F. Austin State University has undergone significant changes since last year. The focus is now on gaining the attention of a younger generation of musicians who are beginning to plan their future careers and are looking at schools that may be best suited toward helping them reach their goals. And, hopefully SFA will be that institution.

This year's competition is slated for Feb. 1 in Cole Concert Hall and is open to high school violinists, violists, cellists and double bassists ages 15 to 18. The semi-finals begin at 1 p.m., followed by the final round at 7:30 p.m.

By focusing solely on this younger age group, officials within the SFA School of Music hope to use the competition as a valuable recruiting tool.

Cash awards are $1,000 for first, $500 for second and $250 for third. The remaining prize money will be awarded in the form of scholarships contingent upon successful admission to SFA's School of Music. First prize is valued in its entirety at $17,000 and includes an appearance as a guest soloist with SFA's prestigious Orchestra of the Pines. Second prize is valued at $12,500, and third at $10,250.

Several years ago, George and Peggy Schmidbauer, California residents who founded Cal-Tex Lumber Company in Nacogdoches more than 25 years ago, wanted to give a donation to SFA to foster and promote classical music. As a result, Moon was asked to formulate a competition.

The competition alternates each year between strings and piano. Applications are accepted worldwide. Past competitions have brought young musicians from South Korea, Russia, Finland and locations across the United States to compete.

As evidence to the caliber of musician the Schmidbauer Competition attracts, the 2011 winner, Ying Fu, won a position in the first violin section with the Cleveland Orchestra while studying at Rice University. Last year, Ying took a new position as associate concertmaster with the Philadelphia Orchestra, an orchestra regarded as one of the top five in the world, according to Moon.

"Ying's accomplishments are reflective of his personal hard work as well as the time he spent with master teachers throughout his career thus far," Moon said. "Competitions such as the Schmidbauer have served as a catalyst to help further his career. Past winners of the Schmidbauer Competition have made similar strides and thus show a proven track record that those involved with it move on to greater career changes.

"The Schmidbauer Competition attracts hard-working, charismatic musicians who remain on the forefront of the classical music industry, and it serves as a stimulus for continued growth in the field," he said.