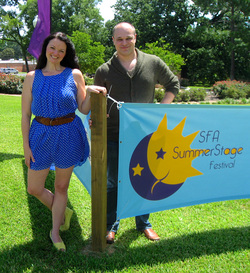 SFA theatre assistant professors Laura Rikard and Zach Hanks are the directors for the School of Theatre's all new SummerStage Festival, which runs through July 18.

NACOGDOCHES, Texas - When the faculty of the Stephen F. Austin State University School of Theatre decided last spring they wanted to take a fresh, new approach to summer theatre, it seemed natural that the school's newest acting teachers would direct the performances.

Laura Rikard and Zach Hanks, both assistant professors of theatre, bring varied backgrounds to the classroom and the stage. Likewise, they have their own reasons for selecting the plays that are featured in the all-new SFA SummerStage Festival that continues through Friday, July 18. The festival features Lewis Carroll's "Alice in Wonderland," adapted by Anne Coulter Martens, and Harper Lee's "To Kill a Mockingbird," adapted by Christopher Sergel.

"First, it's a well-known and much-loved title, and would probably be a reasonably solid audience draw, which is an important consideration for summer," he said. "Second, it's actor- and dialogue-driven, has a simple plot and few technical demands, and has specific dialect demands. It played to my strengths - acting and dialect coaching, and simple stories told simply."

Third, Hanks believed the technical and casting demands could be met by available resources, including SFA's summer talent pool, which is smaller than in the fall and spring semesters.

"The cultural importance of the themes and my own 'make the world a better place through theatre' aspirations certainly factor in, but I try to start with pragmatism," he said.

With "Alice in Wonderland," Rikard said she "wanted to do a play that could utilize the students' knowledge and training, as well as my skills in physical and devised theatre in order to create an energetic, physically vibrant show that would capture the attention of the children in the audience for a full hour."

After Rikard received a Bachelor of Arts in theatre, she moved to New York City where she quickly landed lead roles and performed and trained with the Actors Studio. Next, she ventured to Europe, where she began working in physical and devised theatre with stints studying, teaching or performing at renowned artistic institutions, including the Liverpool Institute for Performing Arts in England and the Odin Teatret in Denmark, and learning Commedia dell 'Arte in Italy. She returned to New York to continue working in theatre and film before earning a Master of Fine Arts at the University of Virginia. She furthered her studies in physical theatre by training and working in Meyerhold's Biomechanics and Viewpoints/Suzuki movement training for the actor, and continued her film, television and theatre career in the Washington, D.C., and Richmond, Va., areas before coming to SFA.

Hanks has a Bachelor of Arts in theatre from Washington and Lee University and a Master of Fine Arts in Acting from the University of South Carolina. Although he specialized in acting, both degrees included substantial coursework in directing. At SFA, he has directed two radio plays for broadcast. Other theatre directing credits include comedic adaptations of Lux Radio Theatre scripts for the Los Angeles old-time radio comedy troupe "Fake Radio," as well as "The Legend of Sleepy Hollow" and adaptations of Appalachian folk tales at Theater at Lime Kiln in Lexington, Va. He's also directed dialogue for many interactive games, including S.T.A.L.K.E.R.: Shadow of Chernobyl, Saints Row and the Company of Heroes and Warhammer 40,000: Dawn of War II series.

Most of the students in the SummerStage Festival have multiple roles, with some appearing as actors in both plays and performing various tasks for both productions involving scenery, lights, costumes, makeup, sound and props. They benefit from the varied experiences and teaching styles of Hanks and Rikard.

"Education, experience and skill set aside, I hope the theme that runs through my approach to performer training is 'pragmatism,'" Hanks said. "I attempt to focus on what is simple, practical, and universal - the aspects of acting, storytelling and entertaining that are not unique to theatre, but that apply to the craft across all performance media, including film, television, sketch comedy, interactive games and commercials.

"Pragmatism also applies to how I guide my students' perspectives on working professionally," he said, "meaning what is the most effective route to the best product, what tells the story, what books the job, what pleases the audience or casting director, what works."

Rikard works to expose the students to many different kinds of theatre arts to help students discover more paths they can follow as theatre artists when they graduate. She said she and Hanks bring professional connections that help SFA students move on to the professional theatre centers across America.

"We both have a lot of energy and excitement," she said. "And we hope to continue to help the SFA theatre program stay strong and become even stronger."

This week's final SummerStage performances include: