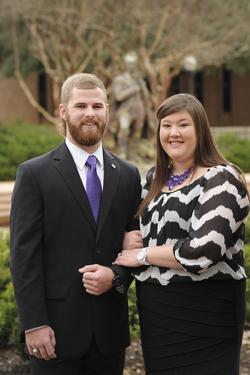 Blake Taylor of Rowlett and Carla Oliver of Texas City were chosen as the 2014 recipients of the Mr. and Miss SFA Awards, presented by the Stephen F. Austin State University Alumni Association.


NACOGDOCHES, Texas - Blake Taylor of Rowlett and Carla Oliver of Texas City were chosen as the 2014 recipients of the Mr. and Miss SFA Awards, presented by the Stephen F. Austin State University Alumni Association.

Taylor is a senior business economics major and the current Lumberjack mascot for SFA. He is the son of Ken and Mary Ann Taylor and a 2010 graduate of Rowlett High School.

Taylor is a member of the SFA Traditions Council and a Jack Walker for the Office of Admissions. He has served as a counselor and student director for Jack Camp and was a member of the SFA Rugby Team from 2010 to 2012. Taylor enjoys participating in community service through The BIG Event and helping with the MLK Day of Service. He assists with Showcase Saturdays and Kids Fitness Day with the United Way. Taylor is the recipient of an Academic Excellence Scholarship, Large Co-ed Spirit Teams Scholarship and First United Methodist Church of Rowlett Scholarship.

Oliver is a senior elementary education major. The 2010 graduate of Texas City High School is the daughter of Ray and Nancy Oliver of Texas City.

Oliver is president of the Purple Haze Association and founder of both the Purple Santa project, a campus wide toy drive for underprivileged children in the Nacogdoches community, and the Community Assistant Honors Council. She is included on the list of Who's Who Among America's College Students and is a member of the SFA Traditions Council. She serves as a student instructor for SFA 101 and supplementary instruction mentor in the SFA Academic Assistance and Resource Center. Oliver participates in Habitat for Humanity with her sorority Sigma Phi Lambda, Kids Fitness Day with the United Way, Jack Camp and SFA's The BIG Event. She is an active volunteer at the Boys and Girls Club of Nacogdoches and the Nacogdoches Animal Shelter. She is a member of the St. Mary's Catholic Student Ministry and served on the Student Activity Association for the 2010-11 academic year.

Mr. and Miss SFA recipients are selected based on their scholarship, participation and leadership in academic and co-curricular activities, citizenship, and service and loyalty to SFA. Selections were made by a committee of faculty and staff members, students, and alumni. Taylor and Oliver will be honored during halftime of the SFA men's basketball game against McNeese State at 6 p.m. Saturday, Feb. 8.


For more information about the SFA Alumni Association and Mr. and Miss SFA Awards, please contact (936) 468-3407 or visit www.sfaalumni.com.