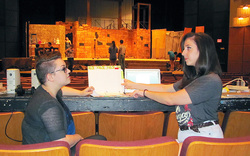 Gore is assistant to Rick Jones, SFA professor of theatre and the play's director. Vernon is dramaturg for the play. But the actual work each student is performing for this complex play and the expertise each brings to the stage is somewhat unique, according to Jones, who explains that both jobs are "pretty much to do what needs to be done."

"Whereas I've had an assistant director on virtually everything I've directed at SFA and a dramaturg for most shows," Jones said, "I've relied on April and Ashe more than I have usually done with students in those positions in the past."

The dramaturg gathers information relevant to the production, such as definitions of terms and information about places mentioned in the script. But often, the dramaturg provides specific expertise. For example, last spring's "Blood Wedding" needed dramaturgs who could help select the best translation of the original Spanish-language text for that play. Jones selected three students who, in addition to being good reliable students and theatre artist, were fluent in Spanish.

For "Trojan Barbie," Jones needed someone who could help him and the cast to negotiate some of the gender issues in the play. As a gender studies minor at SFA, Vernon "could start this process already knowing more about the kinds of behaviors highlighted in this play than I could learn in the available time," Jones said.

Although Vernon researched script details, Jones said that her greatest contribution to the production has been in looking at issues of hypermasculinity, child grooming and rape culture, all of which are seen in this play.

"My first job was to compile a packet that would be given to the actors and designers which included information related to gender, rape culture, gender roles, rape survivors, pedophilia, imperialism and toxic masculinity," Vernon said, "as well as information on Homer's 'Illiad' and Euripides' 'Trojan Women' and other information on Troy and the Greek pantheon of gods."

Vernon explains that hypermasculinity refers to the extreme and dangerous expression of the masculine ideal, or when the idea of "being a man" becomes dangerous and violent, while grooming is a technique used by pedophiles in order to gain children's trust. Both behaviors are addressed extensively in the play.

"I also did a lot of writing about rape culture and rape victims, since that is another theme that comes up again and again in this show," Vernon said. "These women have gone through unimaginable pain at the hands of the soldiers, and it was important that the actors have the background knowledge to understand the extreme conditions under which their characters are operating."

Being dramaturg for such an extensive and complex play was a lot of work for Vernon, "but so rewarding," she said.

"I am absolutely in love with the script of 'Trojan Barbie' and the underlying messages it portrays," she said. "The subjects of gender, feminism and sexuality are all hugely important to me, and I have spent a lot of my own personal time researching them to make sure that I can communicate the concepts effectively. On top of that, I'm a proud feminist who is very outspoken on subjects like gender and sexuality."

Gore wanted to take on the demanding role of assistant director mainly for the educational value of working with and observing Jones as director. But she also wanted this role because of the script.

"After reading the script for the first time, it put a fire in my belly that I couldn't extinguish," Gore said. "The themes and issues in the play were some I feel strongly about and felt they needed to be addressed. I wanted to be a part of something that could really make an audience think and evaluate."

A dancer since age 4, Gore is experienced in tap, jazz and ballet. While living in the United Kingdom, she taught dance and was a choreographer for younger students. This past summer, she choreographed dances for children in workshops at Theatre Arlington, and she has helped choreograph numbers for the Fredonia Players and for Downstage productions. Because of this talent, Jones turned one of the scenes in 'Trojan Barbie" over to Gore.

"The scene I was given was one that I got extremely excited about and was definitely one that suited my personality and flair," she said. "This scene is very different from the rest of the play. We had a lot of fun creating the movement and enjoyed finding the classic moments."

Gore said she has been eager to take on "whatever has been thrown at me" as assistant director, believing that "each task has tested different skills of mine and really trained me to be a better director for the future," she said. She has worked with actors on character building and their monologues, and she leads warm-ups before rehearsals to get the actors focused "and to prepare them for the journey they are about to encounter as these characters."

"Trojan Barbie" will be presented at 7:30 nightly Tuesday through Saturday, Oct. 7 through 11, in W.M. Turner Auditorium in the Griffith Fine Arts Building.

The play is recommended for mature audiences, and a content advisory is available at theatre.sfasu.edu. "Trojan Barbie" is presented by special arrangement with Samuel French, Inc.