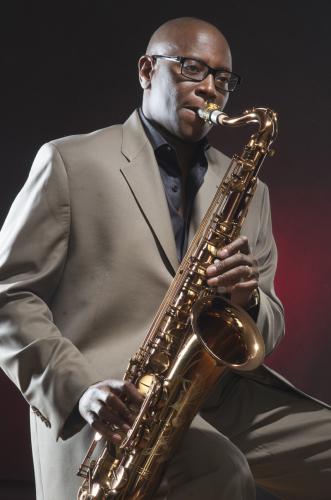 The Swingin' Axes, directed by Dr. Gary Wurtz, professor of trumpet and jazz studies at SFA, will perform "Li'l Darlin," "Double-O" and "Every Day I Have the Blues" from the Count Basie library, as well as Herbie Hancock's "Driftin'" with Carrol as guest soloist. The Axes' program will also feature Duke Ellington's "Perdido," "Stan Kenton's "Pegasus" and Pat Metheny's "The First Circle."

Hailing from a family of gospel singers and musicians in Houston, Carrol attended the High School of the Performing and Visual Arts and was a standout in the city's Summer Jazz Workshop before earning a place in the Grammy-nominated One O'Clock Lab Band at the University of North Texas. As a member of the Duke Ellington Orchestra, he toured the U.S. and 30 foreign countries. Carrol was a finalist in the Texas Commission for the Arts "State Musician" recognition and was named the 2007 Sammons Center Jazz Artist of the Year. He is also a 2014 Dallas Observer nominee for Best Jazz Act and has been on tour with multi-platinum artist Sheryl Crow.

Opening the concert will be the Swingin' Aces, directed by Dr. Deb Scott, professor of trombone and jazz studies, performing a program of "big band classics," including "Moonlight Serenade" by Glenn Miller and the energetic "Sing, Sing, Sing" by Louis Prima. Both will feature graduating senior music major Angel Duran on clarinet as well as junior psychology major Aaron Gentry on drums. Other classics will include John LaBarbera's "Basie's Buddy B," as well as his famous Latin composition, "Tiger of San Pedro," made popular by the great trombonist, Bill Watrous.