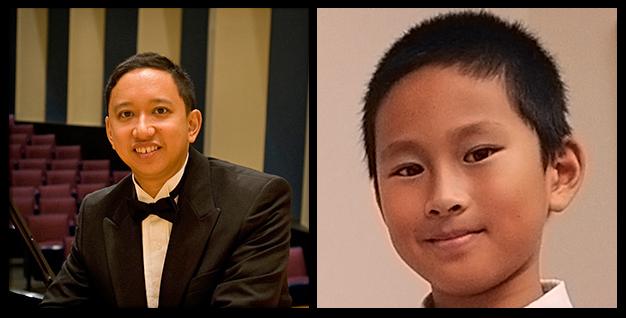 Ajero selected the theme "Piano Reflections" because "the majority of the works on the program are pieces that I had learned when I was younger. I discovered that the process of re-visiting them when I'm older gave me a different perspective on these piano compositions."

The recital in a joint presentation of the College of Fine Arts and School of Music and is included in this year's Cole Performing Arts Series.

As a highlight, the concert will feature Ajero's 10-year-old son and piano student, Antonio "Nio" Ajero, as guest solo artist performing the Piano Concerto in A Major, K. 414 by Wolfgang Amadeus Mozart. Ajero will play the orchestra portion on a second piano.

"This is the first full three-movement piano concerto that Nio has learned," Ajero said, "and in a program entitled 'Piano Reflections,' I felt it fitting to include my son as a reflection of my teaching. I consider it one of the most satisfying experiences to share the stage with him and be able to perform the orchestra reduction part for his piano solo at this age."

Among the other pieces to be performed are Piano Variations by Aaron Copland.

"This is one of my favorite piano works of the 20th century and is much more striking than his more popular compositions and works influenced by jazz," Ajero said. "It focuses on a short main theme from which Copland weaves imaginative musical ideas. The shocking dissonances are contrasted by moments of tenderness as well as variations with changing meter and driving rhythms."

Ajero will also perform Ballade No. 4 in F Minor by Frédéric Chopin, which Ajero describes as "one of my favorite works from the Romantic era. It exhibits beauty in a more traditional sense compared to the Copland Piano Variations."