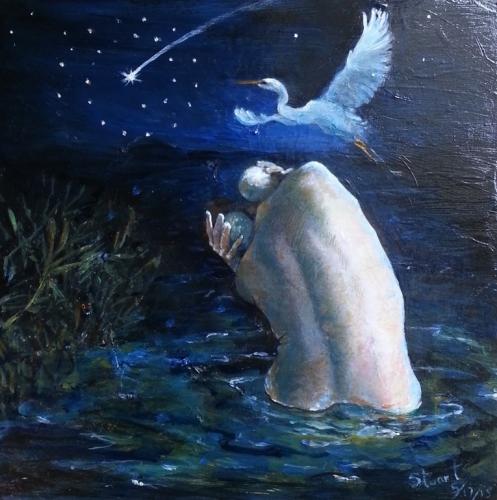 This work by artist Stuart Riordan is among the pieces in the silent auction in the annual 12X12 fundraiser hosted by the SFA Friends of the Visual Arts. Proceeds go toward scholarships awarded to students in the School of Art.


NACOGDOCHES, Texas - Local art lovers look forward to July each year because it signals one of their favorite events - the annual 12X12 fundraiser of the SFA Friends of the Visual Arts.

And this year's event has an added bonus: Two pieces by artists who had solo shows at the Cole Art Center this past year, one by David Yapp and another by Stuart Riordan, have been donated to the auction.

The silent auction bidding began July 1 for this year's 12X12 event benefitting students in the Stephen F. Austin State University School of Art. The 12-by-12-inch panels of artwork created by artists from Nacogdoches, Lufkin and other areas of East Texas are on display at The Cole Art Center @ The Old Opera House, and the bidding will continue until and conclude with the party and sale at 6 p.m. Saturday, July 18, at the downtown art center. Recently retired SFA art instructor Gary Parker has built most of the panels each year.

Serving as co-chairmen of the fundraiser this year are Jean Stephens, Lisa Steed and Linda Mock. Working with them are Kat Avant, who was in charge of hanging the show; Stephanie Stephens, Carol Athey and Jill Carrington, who will serve as cashiers for the sale; and Karon Gillespie, Lou Hugman, Richard Orton and Damon Ruckel, who are in charge of food and drinks. Kat Garcia is organizing the drawing.

The artists do not sign the front of their work, so no one knows who created which piece. At the July 18 party and sale, each 12X12 artwork not bid on (and this is the vast majority of the work, Stephens said) will be sold for $100. Pieces not purchased go into a drawing. Tickets for the drawing are sold at the event for $5 each or five for $20.

The purpose of 12X12 is to raise much-needed funds to help art students pursue their dreams of becoming successful artists and educators, according to Stephens.

"The 12X12 fundraiser is important to both the FVA and SFA art students, because its success determines the amount of financial support we can give the students," she said.

The whole idea behind the 12X12 event came years ago when the head librarian at the Nacogdoches Public Library contacted Parker, who directed the SFA Art Academy for 22 years, to ask if Art Academy students could design and paint a mural for the library. Parker's involvement in fundraisers in other locations that used specific dimensional pieces for artworks gave him the idea for Art Academy students to create individual works that would be incorporated into a mural. Similar works by art educators who were at SFA at the same time attending a workshop would also be incorporated into the mural. Parker cut close to 100 12 x 12 squares of plywood and gave them to the students and educators. The project was a success, and the mural still stands in the library.

Parker had also been working on fundraising ideas with original gallery director Eloise Adams that would involve SFA art alumni. The two made about 300 calls to art alumni and managed to get alumni and every member of the SFA art faculty at the time to donate artwork to an auction, the first of which raised about $11,000. Various ideas for fundraising were tried over the years, but Parker's 12X12 suggestion has surfaced as the most successful.

Within the past year, the FVA awarded more than $11,000 in Friendship Grants and scholarships to 25 students; the grants ranged from $200 to $400 per student while the scholarships ranged from $750 to $1,000. The grants were awarded to help defray the costs of special projects for their art classes or MFA/BA exhibition or to attend conference or school trips that will help with their professional careers, such as Maymester trips for art students to go to Big Bend for a photography project. This summer, the organization also awarded scholarships for three elementary school students to attend the SFA Art Academy.