Artist Parker believes in giving back 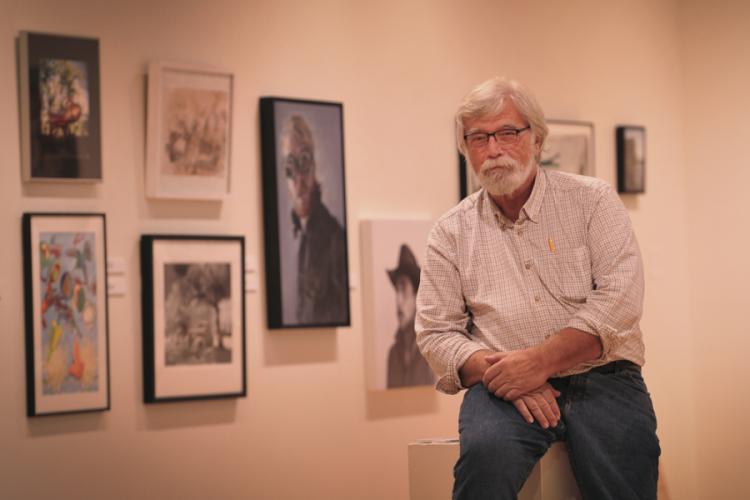 
NACOGDOCHES, Texas - Gary Parker was always interested in art. But it wasn't until he was in his 20s that he began to think he could make art his life's work.

And that's what he did, eventually.

Born in Pennsylvania, Parker pursued a degree in biology until he discovered painting. He completed an MFA from SFA and was employed at the university as Art Shop supervisor. Before his recent retirement, he directed the school's Summer Art Academy program for children for 22 years, taught half-time at SFA and served as the gallery preparator for all of SFA's art galleries.

Parker also ran the student galleries and scheduled all the student exhibitions while teaching students through professional practices how to install exhibitions. He has installed every art fundraiser that FVA has ever hosted, and the past seven years, has built the 12X12 panels that are distributed to local artists for the FVA's wildly popular art auction. He has also donated his own fine art to many of these auctions.

As he reflected recently on his time at SFA and his desire to "give back" to the world of art, Parker talked about how any job within the fine arts requires work, dedication and determination.

"You can talk to any artist, musician or actor, and it's just a lot of hard work," he said. "Usually, there's not a lot of glory involved. Occasionally, you have a show, and people come up and say, 'this is wonderful.' But that's about the only time people pay attention to you."

It's somewhat of a "solitary" existence that requires self-evaluation, he said.

"That's one of the things I like about it, because there is a certain amount of freedom to it," he said. "You are not expected to meet a certain criteria except the criteria you place on yourself."

He describes himself as an abstract painter, but his inspiration is landscapes.

"I like space and texture and all the things involved in landscape, but my work is not literal," he said. "It's metaphorical, for all sorts of reasons."

Although he is retiring, he wants to remain active in the artistic community around Nacogdoches and says he plans to "be painting all the time."

"I'll miss the communication with young minds," he said. "Dealing with the 18- to 22-year-olds is a challenge, but it keeps you vibrant."

And he plans to continue giving back and working closely with the Friends of the Visual Arts.

"When you are working for an institution, you have a responsibility that is more than just getting a paycheck," he said. "You have to return something, especially in academia where you have the ability to influence beyond the classroom by simply getting artwork out there."

But his artistic legacy will continue on campus. Parker created the large Texas mural in the SFA Spirit Lounge, and certain pieces of outdoor art on campus were as a result of behind-the-scenes work of Parker and former gallery director Eloise Adams.

"There is a responsibility for artists to celebrate the whole experience of education in the arena in which they work," he said.

If you could move anywhere in the world, where would you move and why? I would like to have a horse farm in the Hill Country.
If you had $1 million, what would you do with the money? I'd use it to pay for the horse farm.
What is your biggest fear? Uselesness.
What is the best compliment you ever received? My best compliment came from a curator from the Getty (Museum) who said my work gave Kieffer a run for his money.
What is one thing you would like people to know about you? That I wrestle bears, but am a reasonable fellow.
What is your favorite thing about Nacogdoches? That's a hard question, but I guess the landscape.
What is the last movie you saw? "Budapest Hotel"
What is your favorite musical genre? Eclectic on music, but mainly classical
Family background? My wife is Carolyn Spears, director of the Stone Fort Museum, and my daughter is Madelaine, a student at University of Houston and champion show jumper.
Do you have pets? What? One horse, two foundling dogs and many cats (we support O'Malley Alley Cat's trap, spay/neuter and release program).
What do you like to do in your free time? What the hell does free time mean? 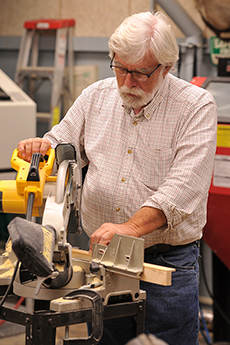 Recently retired SFA art faculty member Gary Parker has provided the panels for the Friends of Visual Arts' 12X12 fundraiser for many years.