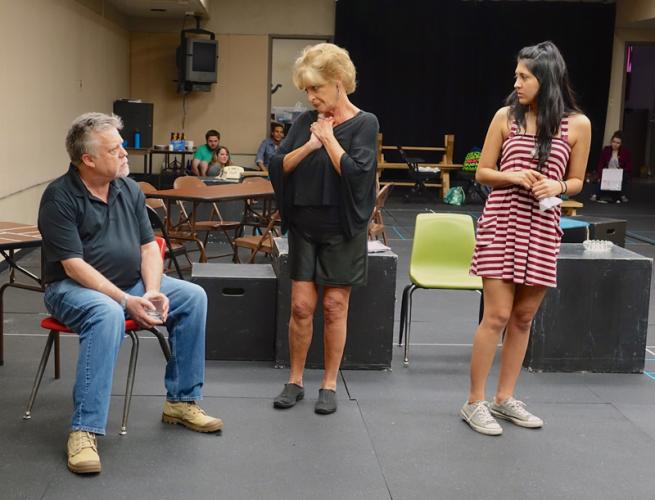 Brad Maule, Rhonda Plymate Simmons and SFA theatre student Anais Saenz rehearse a scene from "August: Osage County" to be performed April 28 through May 2 in Turner Auditorium on the SFA campus.


NACOGDOCHES, Texas - It's not surprising that SFA student actors are learning from their veteran counterparts performing in the upcoming play "August: Osage County." But what has been refreshing for Brad Maule and Rhonda Plymate Simmons is what they are learning from the theatre students.

The Stephen F. Austin State University School of Theatre will present Tracy Letts' rollicking tale at 7:30 p.m. Tuesday through Saturday, April 28 through May 2, in W.M. Turner Auditorium on the SFA campus. A 2 p.m. Saturday matinee is also scheduled.

"I truly enjoy working with the students," said Maule, who is probably best known for his role as Dr. Tony Jones on "General Hospital." "In fact, they tease me because I always show up early to rehearsal, but I'm learning, or remembering I guess, a lot about the incredible discipline it takes to get a show up and running. These students have the same high standards as I've witnessed in many professional theatre companies."

Directed by Scott Shattuck, director of the SFA School of Theatre, "August: Osage County" focuses on what happens to the Weston family when their patriarch, Beverly Weston, played by Maule, disappears and they hurriedly assemble at the rural Oklahoma home of his hilariously caustic, pill-popping wife, Violet, played by Simmons. Their outrageous conflicts and lies collide to launch the corrosive comedy that won the 2008 Pulitzer Prize for Drama and became the basis for the hit movie starring Meryl Streep and Julia Roberts.

"It's a great big play," Shattuck said. "Not only is the set enormous, but there are 11 scenes, two meals served onstage, three physical altercations among the characters, countless props, dozens of costumes, evocative lighting, classic blues-rock music and a hideaway bed. But helping the actors explore the authenticity in the script at the same time they make the story clear, vivid and fast-paced for the audience is probably the biggest challenge."

But the actors - younger and older - quickly formed bonds that allowed them to rely on each other to rise to these challenges.

"Brad and Rhonda are great to work with," said Heather Abbot, assistant director and dramaturg for the play. "Brad is eager to explore the script. He is always excited to come to rehearsal and focus on the work. You never know what to expect from his performance, but it is always engaging and truthful.

"Rhonda brings an exciting presence to the room," Abbott said. "She is never afraid to jump in at full force, even in some of the more challenging scenes. By the time the lights go down in the final scene, I am always moved by her fearlessness and phenomenal portrayal of a tempestuous woman. They are both very professional, and I learn a lot just by watching them work."

Student Anais Saenz plays the role of Johnna, the housekeeper, and acts alongside Maule on stage. She describes the experience as "great, because he is so easy-going and personable."

"The connection he has with his role seems so intimate, which makes reacting to and caring for Beverly that much easier and brings me closer to Johnna," she said.

Acting alongside Maule and Simmons "raises the bar" for student performers, said Allison Day, who plays the character Barbara Fordham, the Westons' daughter.

"Rhonda has this energy to which you can't help but react," Day said. "I was a little apprehensive about working so closely with someone I didn't know, but working with Rhonda feels so natural for me. I think this must be attributed to how well she is playing the role."

Having made a living in theatre for more than 25 years before moving to Nacogdoches to raise a family, Simmons said she jumped at the chance to play the role of Violet Weston and return to the Turner Stage where she was cast in a number of memorable roles, including that of Mama Rose in "Gypsy," when she was a theatre graduate student at SFA.

Simmons said she was excited to be a part of the process of teaching today's theatre students what to expect in the real world of professional theatre. "These kids are being given a realistic idea," she said.

Simmons said she faced her own challenges in this role and production.

"Because of the depth of the writing, it is challenging to give the playwright his due," she said of Letts' writing. "I would like to think if Tracy Letts saw this production, he would be proud of us capturing the essence of what he was trying to do because we were respectful of the text."

"I never tire of sitting on the sidelines watching the students discover that," she said. "What I am enjoying most internally is being given the chance to develop a character that is memorable."

Even though she and Maule differ in age from the rest of the cast, there is a "spirit of ensemble," Simmons said.

"That's not always a given," she said. "You can be in a cast where there is no ensemble feeling. It's just a bunch of egos. But from day one, I have felt a tremendous sense of ensemble here. I have felt welcomed and very much a part of it."

Despite a perception by some that today's college student is out of touch and somewhat cynical, Maule said he has found the theatre students to be "courteous, kind, funny and, most of all, dedicated to their craft. Maybe it's unique to the fine arts, but I prefer to think that through these unique experiences, SFA is creating a more hopeful generation."

Since coming to Nacogdoches, Maule has continued to act in films, television, commercials, and some local theatrical productions. But the main difference between those experiences and the production of "August" is the amount of material that must be studied and memorized, he said.

"This is big play full of challenging ideas and equally challenging dialogue; it rests somewhere between a Greek tragedy and a full-blown southern soap opera," he said.

"My days of learning lots of lines of dialogue are long gone, and I had some trepidation about doing another role with lots of words. But after I read the part, there was no way I wasn't going to do the play. The role of Beverly (played by Sam Shepard in the Oscar-nominated film) is complex, smart, tragic, funny and a once-in-a-lifetime experience. Who wouldn't want this?"

Maule said today's theatre students remind him "of a time long ago when I was a student here at SFA on the exact same stage with my own dreams. I hope they know how talented they are and how much I respect them."