Berry, Turner to perform as soloists in University Series concert 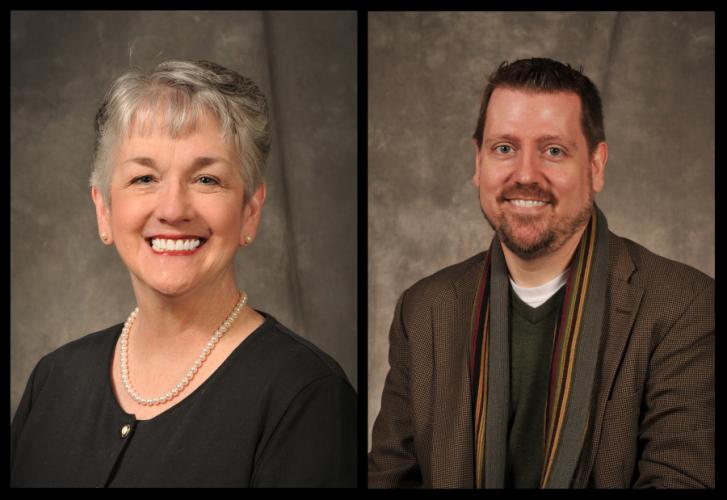 
NACOGDOCHES, Texas - Two members of the Stephen F. Austin State University School of Music faculty will be soloists in the end-of-semester Choral Masterworks Concert to be presented at 7:30 p.m. Friday, May 8, in W.M. Turner Auditorium on the SFA campus.

Under the direction of Dr. Tim King, director of choral studies at SFA, the A Cappella Choir, Choral Union, Women's Choir and the Orchestra of the Pines will perform "Ein Deutsches Requiem" (A German Requiem) by Johannes Brahms as part of the SFA College of Fine Arts' University Series. Guest soloists will be Debbie Berry, soprano, and Chris Turner, baritone.

Berry is a native of Wichita Falls. She received her bachelor's and master's degrees in voice performance from SFA. After teaching at Wayland University, she moved to Kansas City where she did post-graduate work at the Conservatory of Music of the University of Missouri-Kansas City. Following her study in Kansas City, she spent five years in Denver, performing and teaching. She returned to Nacogdoches from San Antonio where she was a private voice instructor at John Marshall High School. She teaches studio voice at SFA. Her performance credits include solo performances with the Kansas City Philharmonic, the Civic Orchestra of Kansas City, the Longview Opera Company, the Central City Singers (of the Central City Opera House Association), and regular appearances as a recitalist in Denver, Kansas City, and in various regions of Texas. She has performed extensively in musical comedy, with more than a 20 roles in productions of Nacogdoches' Lamp-Lite Theatre.

Turner is a native of Pascagoula, Miss., where he began singing at the age of 5. Having studied at Mississippi College, Louisiana State University and the Eastman School of Music, he is an experienced and award-winning vocalist. His performance experience is in a wide variety of genres from opera and oratorio to contemporary settings. Turner is a recipient of the Governor's Award and a five-time state and regional award winner with the National Association of Teachers of Singing. Among other honors, he was finalist in the Lois Alba Opera Aria Competition and finalist in the Lyndon Woodside Solo Competition. Turner is an assistant professor of voice at SFA.

Prior to the performance, King will give a 7 p.m. informative talk in Griffith Gallery located across the hall from Turner Auditorium.