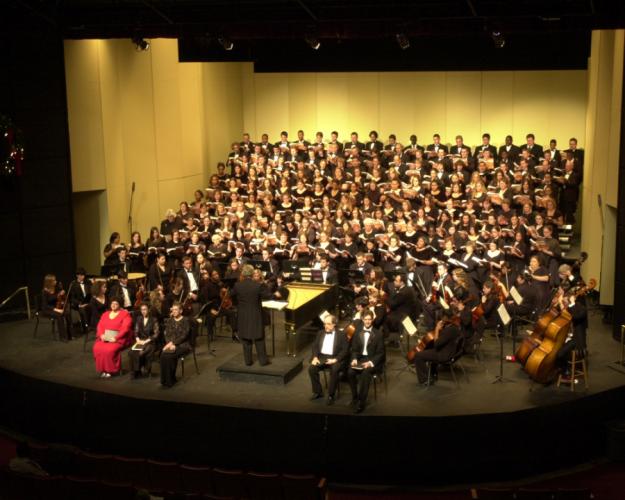 SFA's combined choirs and orchestra will perform "Ein deutsches Requiem" (A German Requiem) at 7:30 p.m. Friday, May 8, in W.M. Turner Auditorium on the SFA campus.


NACOGDOCHES, Texas - Stephen F. Austin State University College of Fine Arts and School of Music will present the final performance of the 2014-2015 University Series featuring the Choral Masterworks Concert at 7:30 p.m. Friday, May 8, in W.M. Turner Auditorium on the SFA campus.

Under the direction of Dr. Tim King, director of choral studies at SFA, the A Cappella Choir, Choral Union, Women's Chorus and the Orchestra of the Pines will perform "Ein deutsches Requiem" (A German Requiem) by Johannes Brahms. Guest soloists will be School of Music faculty members Debbie Berry, soprano, and Chris Turner, baritone.

According to King, The Brahms' Requiem, as it is affectionately called, stands firmly as one of the true masterworks in music's entire repertoire.

"Unlike previous Requiems (mass for the dead), this work is not a liturgical work, but rather a statement of encouragement for the living," King said. "With a complete absence of over-romanticizing, Brahms succeeds in expressing comfort, suggesting the joys of paradise, showing his faith in the righteousness of God, and filling the whole work with a tone of contentment."