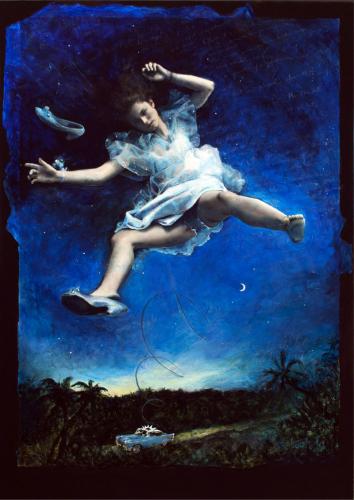 "When the Woods Got Heavy" by American painter and designer Stuart Riordan will be among the pieces featured in the exhibition "Stuart Riordan: Sardines & Oranges," which is showing at The Cole Art Center @ The Old Opera House through March 28.


NACOGDOCHES, Texas - The exhibition "Stuart Riordan: Sardines & Oranges", which runs through March 28 in The Cole Art Center @ The Old Opera House in downtown Nacogdoches, features Riordan's renowned paintings of the human form, according to John Handley, director of galleries at SFA.

Riordan has said of her work, "The human body has more gestures, mystery and intrigue, and everybody can relate to it. I think Socrates said an artist does his stuff but is not 'there' when doing it, and only after it is done can the artist formulate ideas of the work and viewers formulate their ideas." Quoting abstract expressionist artist Willem de Kooning, she said, "'It's all in the flesh' is what de Kooning said, and he was right."

Tallahassee Democrat writer and columnist Mark Hinson wrote: "At first glance, Riordan's accomplished human figure paintings seem formal and even neo-traditional - far away from, for example, de Kooning's 'Women' series. But on closer inspection the viewer notices her attention to the gestural aspects of the painting - the swirls of color, the layering of paint, the strokes that have been created by using the other end of the brush, of the fractured sentences and phrases that run across the work as if yanked out of some larger sequence."

Riordan mixes her own paints, which are made from dirt, clay, pumice and dry pigments imported from distant locations such as Tasmania and Australia.

The exhibition, sponsored in part by the SFA Friends of the Visual Arts and Nacogdoches Junior Forum, is a feature of the SFA College of Fine Arts' University Series. Admission is free.