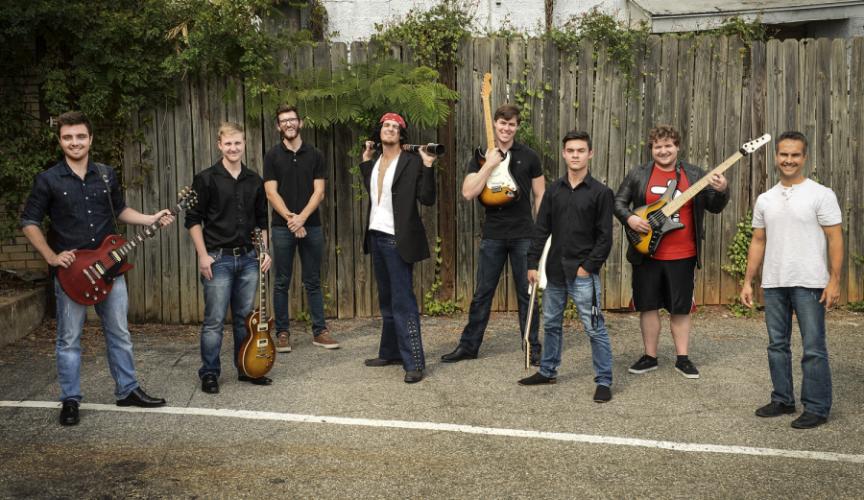 "Led Zeppelin: Mastering Cross Genres with Bold Originality" features performances of "Kashmir," "Going to California," "When the Levy Breaks," and other Zeppelin favorites.

The Contemporary Guitar Ensemble is made up of students in the SFA School of Music's Sound Recording Technology program. The ensemble's purpose is to allow guitar students to "experience the many different functions of their instruments," according to Andrew J. Sperandeo, SRT instructor and director/arranger of the ensemble.

"Many of the parts are written in horn section format similar to a big band where they play harmonized melodies, solis, etc.," Sperandeo said. "Students are also required to utilize different effects throughout the arrangements painting a certain sonic landscape."

In choosing the Zeppelin-themed program, Sperandeo said he wanted to "expose students to the great music written by Led Zeppelin that crosses many boundaries of style and has, in one way or another, influenced much of the modern rock we hear today."

The concert will consist of all Zeppelin music arranged for guitar quartet accompanied by a rhythm section consisting of drums, bass and piano and fronted by two vocalists.

In "Going to California," Zeppelin shows the ability to write in the psychedelic folk genre as well as rock and blues, he said.

Originally recorded in 1929 by Kansas Joe McCoy and Memphis Minnie, "When the Levy Breaks" was rewritten and recorded by Zeppelin in 1971.

"It's a true good 'ole grit blues written in reaction to the upheaval caused by the great Mississippi Flood of 1927," Sperandeo explained.

The Contemporary Guitar Ensemble includes SFA students Gavan Maners of Rockwall, Nelson Privette of Winnsboro, Wesley Cortaius of Friendswood and Chance Forrest of Anna on guitars; Austin Gehring of Missouri City on bass; Matthew Coronado of Cypress on drums; and Alex Ballard of Bastrop on vocals. Guest artists for this concert are Robert Killingsworth of Seabrook, piano, and Chris Moore of Highlands, vocals.