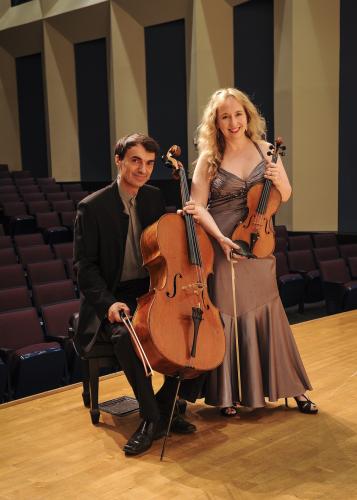 Dr. Jennifer Dalmas, associate professor of violin and viola, and her husband, Dr. Evgeni Raychev, cello instructor, will perform in the program "Between Worlds" at 8 p.m. Friday in the Weill Recital Hall, Carnegie Hall, New York.

The InterHarmony International Music Festival has been bringing together students, teachers and soloists from around the globe for almost two decades. For the opening night of the IIMF's fourth annual concert series, Music Director Misha Quint presents a program that celebrates music's role as a universal ambassador.

Dalmas and Raychev will present Maurice Ravel's Sonata for Violin and Cello, described as one of the great examples of the duo form. A conversational drama develops between the low and high voice, in which the roles of lead and accompaniment intertwine seamlessly. "They discuss polyphonically, disagree sharply, even as to the key, seduce and reject each other, moving imperceptibly but inexorably towards reconciliation in the final chord," according to the program notes. The duo will also perform Mark O'Connor's "F.C's Jig." "F.C." stands for "Fiddle Concerto," as the melody of this duet is taken from O'Connor's well-known work.

A member of the SFA music faculty since 2003, Dalmas has performed with the Tallahassee, Jacksonville, and New World symphonies, the Atlanta Baroque Orchestra and the Apollo Ensemble. She has served as concertmaster for the Orchestra of the Pines and performed with other regional symphonies. An avid chamber music player, she has been a member of both the Alazan Piano Trio and East Texas Baroque. She and Raychev perform together as the Hachidori Duo.

Also a member of the SFA music faculty since 2003, Raychev is the founder of the Piney Woods Camerata, Piney Woods Youth Orchestra and a founding member of the Alazan Piano Trio. His newest endeavor is the foundation of the Cello Club in the fall of 2014, where cello enthusiasts of all ages are prepared online to gather together for a concert at SFA.