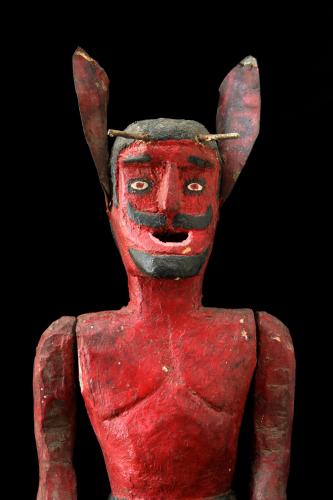 "The Devil You Say! The Saintly, and Not So Saintly, in Folk Art" will show Oct. 24 through Jan. 16 in Reavley Gallery in The Cole Art Center @ The Old Opera House.


NACOGDOCHES, Texas - "The Devil You Say! The Saintly, and Not So Saintly, in Folk Art," an exhibition that explores folk art and its relationship to religious and cultural traditions, will open with a reception from 6 to 8 p.m. Saturday, Oct. 24, in The Cole Art Center @ The Old Opera House in downtown Nacogdoches.

"Although some of the work is quite serious in nature, there are also examples that are playful and poke fun with a sense of humor," said John Handley, director of art galleries for Stephen F. Austin State University. "Many items in this exhibition are rarely displayed outside of private collections, including early examples that date from the late 18th and 19th centuries.

"All works can be understood to some degree as religious in nature, from depictions of the crucifixion and saints to those of mythical devils and characters," he added.

In the introduction to the catalogue for the exhibition, Handley explains that for centuries "people have been fascinated with the depiction of holy individuals, as well as monsters and devils, pitting the longing for piety and morality against a pantheon of temptations and evildoers."

Handley goes on to write: "Christian icons as early as the 7th century show little devils pulling saints from a ladder as they strive to ascend heavenward. Such notable artists as Hieronymus Bosch and Michelangelo devised nightmarish scenes of hell where the condemned are in a state of constant torment, while in other scenes the saintly live on in bliss. 'The Devil You Say!' explores this rich iconography through the world of folk art, most of which was made by unknown craftsmen."

"The Devil You Say! The Saintly, and Not So Saintly, in Folk Art" will show in Reavley Gallery through Jan. 16. Opening the same night are two other exhibitions, including "The Tenderness of Egocentrism: Drawings by Manuel Miranda" in the Reception Gallery and "25 Veinticinco: Mexican-American Prints from UT San Antonio" in Ledbetter Gallery, both of which run through Jan. 2.