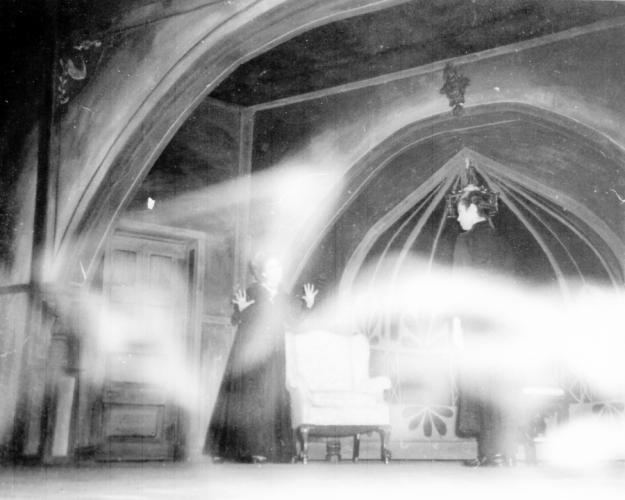 Actual photo taken by Tomy Matthys on the set of Tiny Alice in 1967. The photo shows a vaporous image floating across the scene in the form of a human body wearing a cowled hood.


As Oct. 31 nears each fall, journalists search for stories to write that capture the spirit of Halloween. Legends of ghosts, goblins and other paranormal creatures find their way from the past to the present with each writer hoping to tell these stories in a new and exciting way.

Such is the case with the "ghost" that supposedly inhabits the Griffith Fine Arts Building on SFA's campus. Just about every student who has attended SFA has heard about Chester, and many news articles have been written about him, usually around Halloween. No one knows these stories better than Tomy Matthys, retired SFA theatre faculty member, who had a few unexplainable incidents during his 45 years working in Griffith, which houses W.M. Turner Auditorium.

"I don't know that anyone can prove or disprove ghosts," he said, "but I've never been in a theatre that didn't have one."

Strange things began happening in Griffith in 1967 during the SFA theatre department's production of Edward Albee's Tiny Alice. Directed by Dr. Kenneth Waters with costume and set designs by Matthys, Tiny Alice is remembered for the phenomenon of a "presence" reported by students and professors associated with the play - drafts of cold air, approaching footsteps with no one visible, doors rattling and opening by themselves, and what appeared to be a luminous face on the auditorium wall.

In addition to those first encounters with Chester, (who was given his name by Waters) the most compelling "evidence" of a ghost is the now-famous photograph taken by Matthys on the Tiny Alice set that shows a vaporous image floating across the scene in the form of a human body wearing a cowled hood.

The developed negative was returned to Kodak to ensure the film was not damaged, and the company responded by saying everything in the image was "a part of the subject matter; there was not a flaw in the negative," Matthys said.

After that, unusual things continued to happen in the building.

A few months after Tiny Alice, during a production of William Shakespeare's Macbeth, which is surrounded with superstition and is considered by many "a haunted show," Chester was blamed for another strange occurrence.

In this SFA production, when the glowing faces of the ghosts of the eight kings of Banquo appear to Macbeth on a black-light set, instead of eight heads, there were nine. It was first suspected that the technical crew was playing a joke, but the actors portraying the eight ghosts could not explain the extra head.

In following years, Chester made less dramatic appearances - unaccounted-for lights going on and off during a rehearsal for Winterset, footsteps on the catwalks when no one was there and spotlights flashing on and off with no operators present during late-night props work for Fiddler on the Roof.

"What people define as a ghost are unusual events occurring to only one or two people," Matthys said. "If you want a rational, physical reason for it, there is a high energy that develops in a theatre, especially around the time a play is premiering. People are in the theatre at all hours of the night. You turn lights on, burn them for several hours, then turn them off, and you've built up a lot of heat energy that expands and contracts the lumber."

Having said that, Mattys remembers an incident that happened one afternoon in the late '90s. "We had just gotten a new electronic lighting board. I walked into the theatre and up on stage, and a spotlight shined on me," Matthys said. "I looked up, expecting to see someone in the lighting booth but there was no one there. That light went off, and another came on in a different location. This went on for about 30 minutes. As it continued, it got more and more intense. I sent someone up to the booth. No one was there, and the board was turned off, yet all of these lights were coming on and going off, as if Chester was checking out the new system."

Two stories that have been told over the years to explain Chester's origin-the architect of the Griffith Fine Arts Building dying of a heart attack and a construction worker who fell to his death while Griffith was under construction-are not true.

What is true is that faculty members prefer to pay little attention to the lore of Chester and instead concentrate on the performances and satisfaction of the audiences.

But, some people believe Chester still shows up at times, playing with lighting or whistling in "the cave," which is adjacent to the costume shop and used for storing props and sets. Chester jokingly gets blamed for jammed copiers, malfunctioning equipment and missing food in refrigerators.

"In the theatre, you are dealing with artistic, imaginative individuals with creative minds who are hyped up on the emotional moment of a production," Matthys said. "You're not dealing with scientists or physicists. You're dealing with people who explain things metaphorically instead of pragmatically. And all that energy has to go somewhere.

"I came to the point where I could tell how successful a show was going to be by how noisy Chester became after hours," he said. "The more noise, I could guarantee the show's success. That's probably because of the energy of the students themselves, the hustle and bustle and excitement they had over the show."

Perhaps a presence will return to Turner Auditorium for the November production of Macbeth, which will be directed by Dr. Richard Jones, professor of theatre. Like many professional actors and directors, Jones prefers to not call this Shakespearean masterpiece by its name. He superstitiously refers to it as "that Scottish play" or "MacBee."

If an eerie glow is seen late at night in Turner auditorium after the performances Nov. 17 through 21, it's probably just the ghost light illuminating the stage.