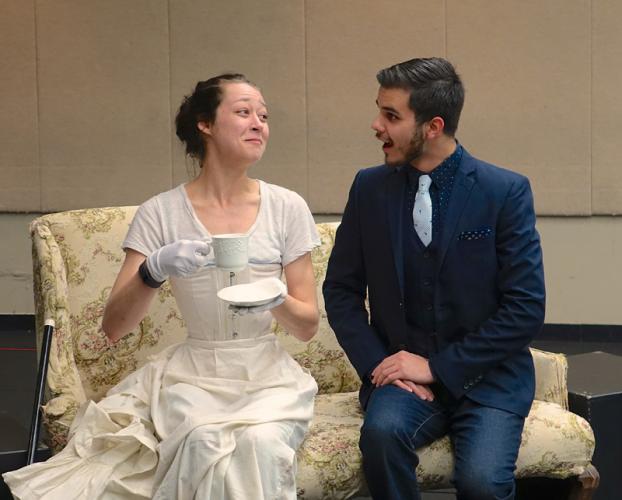 Paris junior Shelby Gilliam as Lady Bracknell and Richmond sophomore Keenan Chiasson as Algernon rehearse for SFA's upcoming production of "The Importance of Being Earnest." Working in a studio near W.M. Turner Auditorium, they incorporate only a few essential properties and costume pieces at this early stage of preparation for the show, which runs Tuesday through Saturday, March 3 through 7 at 7:30 p.m. with a special school-day matinee at 10 a.m. on Thursday, March 5. Call (936) 468-6407 or visit theatre.sfasu.edu for tickets or more information.


NACOGDOCHES, Texas - Anyone who loves outrageous characters and clever comedy will want to see "The Importance of Being Earnest" when the Stephen F. Austin State University School of Theatre performs Oscar Wilde's classic play Tuesday through Saturday, March 3 through 7, in Turner Auditorium on the SFA campus.

This cheerful and lighthearted comedy of manners, which Wilde called "a trivial play for serious people," is his brilliant tour de force, regarded by many as the wittiest play in the English language, according to Jack Heifner, SFA's playwright-in-residence and director of the show.

"Jack is in love with Gwendolen, but when it is revealed that both Jack and his best friend, Algernon, are living a very big lie, a delightful comedy with outrageous revelations unfolds," Heifner said. "The play is a swift comedy of manners - good and bad - and is an enchanting love story that satirizes everything in Victorian society."

In deciding what he would like to direct this semester, Heifner chose "The Importance of Being Earnest" because he thought theatre students needed to experience "a classic play that would teach them more about period styles," he said.
"Since this play is set in Victorian England, it provides an excellent opportunity for our students to explore a time that is very different from their own," he said.

Today's manners can be considered quite "casual" compared to the manners of 1895, which is when the play was first performed, Heifner explained.

"We have done a lot of research into the period, including a great deal of reading, as well as watching a biography of the life of Oscar Wilde and a video about the manners of the time."

Beautiful sets and costumes will reflect the opulence of the time period, Heifner said.

"We are setting the play at the time it was written and in the theatre where it first played - the St. James Theatre in London," he said. "The play opened on Feb. 14, 1895, and it still remains a gorgeous Valentine to the theatre."

The play is considered "G" rated, although younger children likely will not understand the language and might be bored, Heifner said. There are no situations in the play that would be considered offensive to a typical audience.

Mastering the language in the script, the time period, the manners and the comedy will be challenging for Heifner and the student actors.

"It's a very witty satire," Heifner said. "I love challenges and so do our students. The play is an excellent opportunity for our students to work on a classic play that is considered one of the greatest comedies of all time."

Heifner promises to deliver a "witty twist" on the production that will offer new delights and insights. "It is something I will not reveal," he said. "It has to be seen!"

He believes that anyone who sees the show will leave Turner Auditorium with "a smile, an understanding of Victorian manners, and an appreciation of Oscar Wilde's brilliant mind."

"Most of all, I want them to be dazzled by our talented students in the School of Theatre," he said.