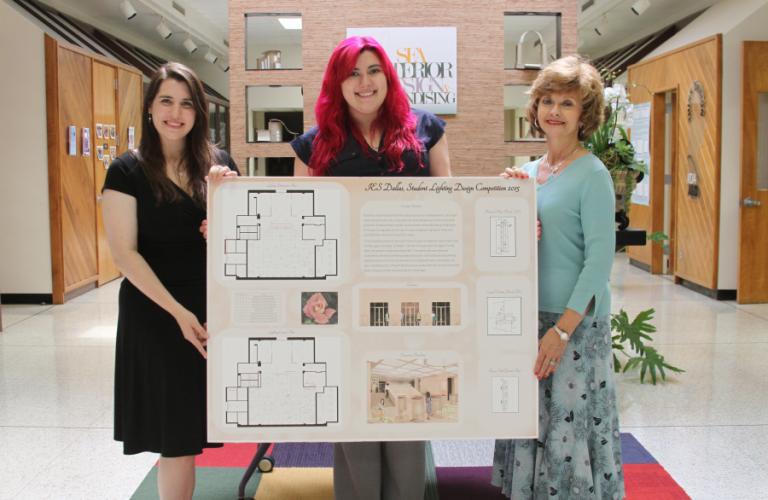 
NACOGDOCHES, Texas - Light bulb! Stephen F. Austin State University junior interior design majors Jessalyn Welch and Hayley Breshears had the right idea when they designed a feminine boutique called "Marguerite" for the Illuminating Engineering Society Lighting Competition in the spring semester. While Welch and Breshears worked on their project from February to May, the two were recently notified that they placed fourth in the competition out of 39 other entries representing four universities.

"We were both surprised and excited when we received the news," Welch said. "It was an honor to represent SFA as one of the winners in the competition."

Breshears agrees it was a wonderful feeling receiving the email announcing their win. She said she had to read the email a few times before she was able to absorb the good news. Their win earned them $250.

The pair completed their entry under the guidance of Dr. Mitzi Perritt, professor of interior design at SFA. The project was part of the curriculum in Perritt's studio class.

The IES Lighting Competition required students to design unique lighting and interior layouts for the same retail space. Each contestant needed to include three custom-lighting fixtures that illustrated creativity and efficiency. Welch and Breshears used a garden as their inspiration in creating the feminine boutique Marguerite, which translates to daisy in French.

"In a garden, you think of the air being light, breezy and filled with sunshine, and that is what we went for with our lighting," Breshears said. "Our three custom fixtures were a backlit Polaroid, an uplit curtain of crystals and a wall that appeared tufted with light shining behind the buttons."

The curtain of crystals represented raindrops on rose petals, and the Polaroid furthered the feeling of nostalgia. Also, the students chose to use true white light to convey sunshine.

Throughout the project, Welch and Breshears continually developed their design concept and constantly looked for ways to improve their lighting ideas. Before sending their final draft to the judges, Welch and Breshears traveled to Dallas to present their ideas to industry professionals who offered critiques. Once the final revisions were made, the students submitted the final board and PDF to the IES competition.