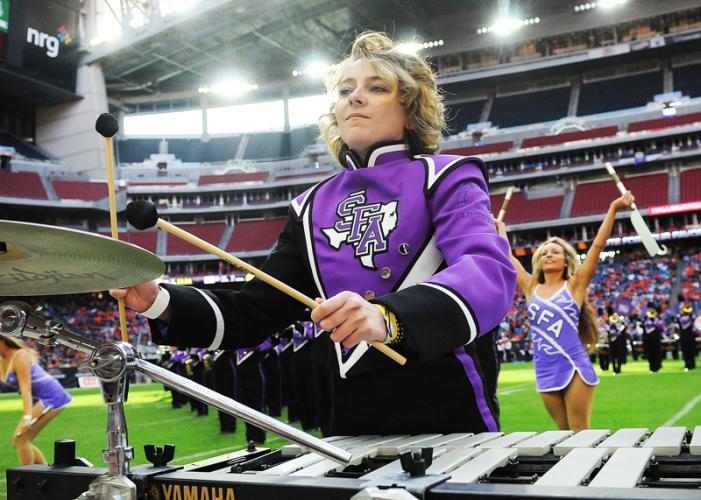 Austin freshman Tori Rice performs at the 2014 Battle of the Piney Woods in NRG Stadium in Houston. The video of this performance of the Lumberjack Marching Band was selected for presentation at the College Band Directors National Association convention March 25 through 28 in Nashville, Tenn.

A video of the band's performance last fall at the Battle of the Piney Woods in NRG Stadium in Houston is among 10 videos selected nationwide of marching band performances that will be showcased during the College Band Directors National Association convention March 25 through 28 in Nashville, Tenn.

"To be selected by a committee of your peers on the national level to share your performance is significant," Campo said. "Additionally, we are in the company of schools recognized for their history and greatness, including University of Michigan, Michigan State, University of Arizona, University of Florida and others. There were only 10 bands selected for this recognition."

SFA received notification of the honor from Sam Sanchez, assistant director of bands at Notre Dame University and chairman of the CBDNA Committee on Athletic Bands.

"I am truly impressed with the creativity that is happening in college marching bands," Sanchez said.

"We are by far the smallest school presenting at the conference," Campo said, "so it brings recognition for the excellence in teaching at the SFA School of Music."

"We are very excited for this national recognition and look forward to showcasing our wonderful students," Anglley added.

The Lumberjack Marching Band has also been selected to perform in the 2015 Macy's Thanksgiving Day Parade. The band is one of only four university bands chosen from more than 175 bands considered to perform in the traditional New York City parade on Nov. 26.

Additionally, the band led off the 2013 London New Year's Day Parade & Festival, which was watched by more than 600,000 spectators and televised to 280 million people worldwide.