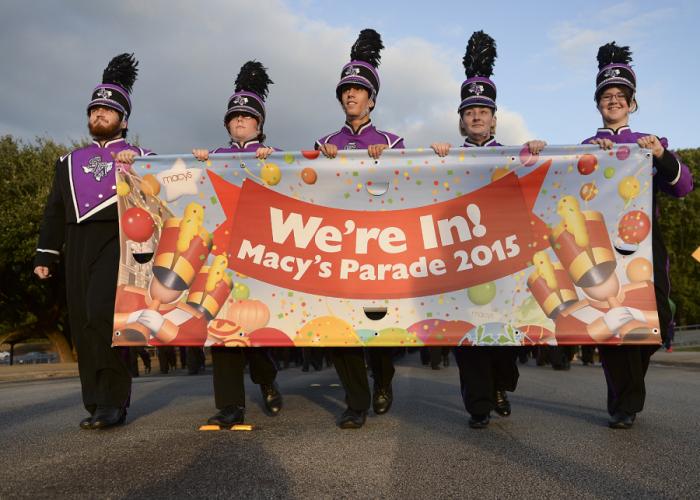 The Stephen F. Austin State University Lumberjack Marching Band will perform in the Macy's Thanksgiving Day Parade Thursday morning, Nov. 26, to be televised by NBC. Pictured, from left, are band members Harley Stahl of Alvin, Katy Pleake, of Kaufman, Vann Chandler of Fort Worth, Sophia Lee of Midland and Shannon Valenta of Allen.


While many Stephen F. Austin State University students will spend a relaxing Thanksgiving Day at home celebrating the holiday with family and friends, the members of The Lumberjack Marching Band will be far from home representing SFA in a big way.

Thursday at approximately 10 a.m., the Lumberjack Marching Band will take the "Boldest Sound from the Oldest Town" to New York City where members will perform in the Macy's Thanksgiving Day Parade and show their university pride in the band's signature spirited style.

The LMB leaves Tuesday to make another appearance on a worldwide stage as one of four bands selected from more than 175 applicants in the 2.5-mile parade route. More than 300 Lumberjack musicians and their directors will travel in two chartered flights from Longview to Atlantic City, New Jersey, and then travel by bus to their hotel in Newark, New Jersey. On Thursday morning, the LMB will take its place as the second band in the full parade line-up behind Macy's All-American Marching Band.

Under the direction of Dr. David Campo, associate director of bands at SFA and LMB director, and Dr. Tamey Anglley, assistant director of bands, the band has been preparing "diligently" for this performance that will be seen by millions, according to Campo.

"We wrote the drill for our Herald Square performance and have spent the last month teaching it to the band," he said. "The challenge is that, unlike a football field, there are no lines on the street to help with orientation."

Macy's required SFA to provide a video of the band's planned performance a few weeks ago. Parade officials specified they wanted the video to be filmed on a street and show band members in full uniform. University officials were more than happy to help, Campo said.

"We are blessed to work at a great institution with great people," he said. "The University Police Department blocked off East College Street, and the Physical Plant provided us with a scissor lift for this production."

While NBC network and Macy's officials instructed the band directors not to release information detailing the band's performance, Campo said the music selection "pays tribute to our university, state and nation."

"I have watched Dr. Campo and Dr. Anglley work for over a year and half on this project," said SFA Director of Bands Fred J. Allen, who arranged the piece the band will perform in Herald Square. "They are going to make SFA proud with the outstanding performance the band will give."

Campo is looking forward to representing SFA on such a grand scale.

"This is an iconic event," Campo said. "Almost everyone grows up watching the Macy's Thanksgiving Day Parade. It is truly considered 'America's parade,' and it is a true honor to be selected to represent our university, community and the state of Texas in an event where 3.5 million people will line the streets of New York City to see it and more than 55 million will view it on television. I'm very excited to have the SFA logo seen by that many people!"