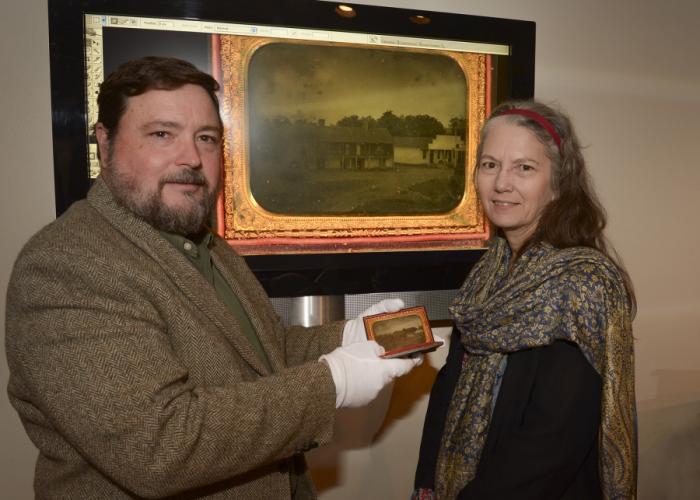 Michael Rugeley Moore, left, recently donated the ambrotype of the stone house to the Stone Fort Museum. Stone Fort Museum Director Carolyn Spears, right, said the image will be on display at the museum as part of the tricentennial celebration in 2016


NACOGDOCHES, Texas - A donor recently gave an ambrotype image estimated to be about 160 years old of the stone house to the Stone Fort Museum on the Stephen F. Austin State University campus.

The image will be on display in 2016 as part of the tricentennial celebration at the museum, according to museum director Carolyn Spears.

"I'm very excited about the acquisition of this ambrotype for the Stone Fort Museum's collection," Spears said. "The object is not only an early document depicting the stone house on the square, but also an example of early photographic processes. It's just a beautiful thing."

Michael Rugeley Moore, who donated the photographic image to the museum, said the image has been in his family since it was created, and he estimates it was taken in the 1850s.

Ambrotypes were popular in the 1850-60s, and tintypes and other photographic processes later replaced the medium.