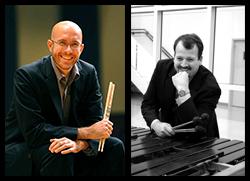 Meyer, director of percussion studies at SFA and of the Percussion Ensemble, will play the steel pan on the premiere of Baljinder Singh Sekhon II's "Passageways," which utilizes the steel pan in new and different ways, including playing on the side and with wooden chopsticks.

Lloyd will perform on "Shadow Chasers," an exciting piece by Michael Burritt for marimba soloist with percussion trio that is now considered a standard of the percussion world.

In "Passageways," each section is a process-oriented progression of rhythm, pitch and timbre, according to its composer. The segments of this work can be heard as a string of transitions where each section serves as a passageway leading to the next.

In describing his piece "Shadow Chasers," Burritt wrote of C.S. Lewis and the English author's referencing one's time on earth as the "Shadow Lands."

"Many implications can be drawn from this metaphor," Burritt wrote. "I have always considered myself, and most people, to be someone who chases after the thing of the Shadow Lands (a 'Shadow Chaser') rather than those of a higher calling. I too often look for rewards here instead of in my relationship with God. This is a battle I will constantly fight."

Other pieces on the program are "Cyclone" by Jim Casella, "Catching Shadows" by Ivan Trevino, "Escape Velocity" by Dave Hall and "From In Contact" by David Skidmore.

Tickets for the recital are $8 for adults, $6 for seniors and $3 for students and youth. For tickets or more information, call the SFA Fine Arts Box Office at (936) 468-6407 or visit www.finearts.sfasu.edu.

To learn more about the SFA Percussion Studio, visit/subscribe/"like" their online presence at: