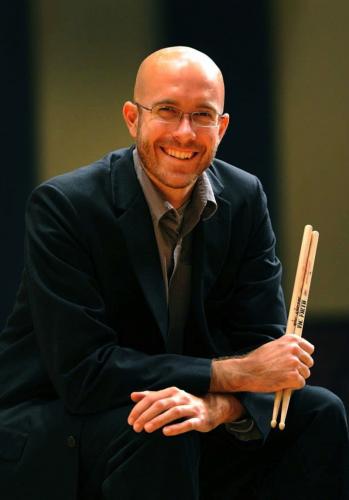 SFA's Dr. Brad Meyer will perform the premieres of a number of percussion pieces in a recital at 7:30 p.m. Monday, Aug. 31, in Cole Concert Hall in the Wright Music Building on the SFA campus.

The first event in the 2015-2016 Cole Performing Arts Series of the SFA School of Music, the recital is at 7:30 p.m. Monday, Aug. 31, in Cole Concert Hall in the Wright Music Building.

The performance includes several premieres, including Ivan Trevino's "Hold Fast" for vibraphone and drumset, Mark Applebaum's "Composition Machine No. 1" and Meyer's world premiere of his own arrangement of Steven Bryant's "Hummingbrrd."

"Hold Fast" is a vibraphone and drum set duo commissioned by a consortium of 28 percussionists and colleges around the U.S., according to Trevino. While writing the piece, Trevino said he and his wife, Amanda, "took a leap of faith."

"She left her job, we sold our home in Rochester, New York, and we packed our bags for Austin," he said. "While an exciting time, the move required us to support each other in ways we had yet to experience. With 'Hold Fast,' I wanted to capture my emotional state during this time. The piece is technically very challenging, requiring each player to hold steady and be a foundation for the other."

Keith Lloyd, assistant professor of percussion at SFA, will play drumset on "Hold Fast" with Meyer on vibraphone.

Applebaum's "Composition Machine No. 1" is a blend of improvisation, composed improvisation, and traditional notated composition, Meyer said. The piece is in three parts with the first and last being semi-improvisations on contrasting percussion set-ups, and the middle section being a traditionally written section involving such "percussion instruments" as bottle caps, cups, bowls, chains and tree branches.

Meyer will perform his own vibraphone arrangement of Bryant's "Hummingbrrd," which was originally an electronic work with no live performer. Several months of Meyer working with Bryant after he visited SFA last fall resulted in "an exciting and entertaining new version" of the piece, Meyer said.

Meyer will also perform the virtuosic, four-mallet marimba solo "Burritt Variations" by Alejandro Viñao, as well as Applebaum's composition for gestures and tape.