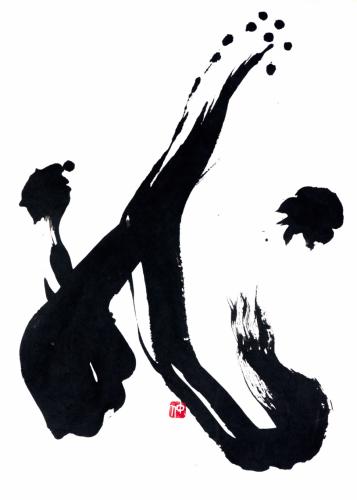 The image ryu (dragon) is part of an exhibition, "Ron Y. Nakasone: Formless Form, the Art of Sho," that will show in Griffith Gallery Oct. 15 through Nov. 20.


NACOGDOCHES, Texas - The exhibition "Ron Y. Nakasone: Formless Form, the Art of Sho" will open with a reception at 5:30 p.m. Thursday, Oct. 15, in Griffith Gallery on the campus of Stephen F. Austin State University.

The exhibition features the modern expression of a traditional art form that is still highly respected in East Asia. The art of "sho" and its metaphysical support, Buddhist thought, especially that of Zen, had a great impact on Western art in the later half of the last century, according to John Handley, director of SFA art galleries.

Nakasone states that "the Art of Sho (calligraphy) uses the soft (Chinese) brush, free flowing ink, and absorbent paper to give form to the artist-writer's being, feelings and thoughts. The art is an opportunity for the sho-artist to give form through line and space to his or her spiritual landscape."

During the late 1940s and early 1950s, sho artists, intent on revitalizing their tradition, saw a commonality with the non-representative subject matter of modern art and the spontaneity of the creative process in the action paintings exemplified by Jackson Pollack. Many Western artists felt a kinship with the expressive spontaneity of Zenga (Zen paintings) and Zen-inspired sho.

"This affinity resulted in a number of exhibitions that highlighted the expressive possibilities of the brush to mirror the inner life of the artist," Nakasone said.

While the more subtle technical aspects of and aesthetic qualities created by the soft brush may be difficult to discern, audiences beyond East Asia can appreciate the expressive movement of line and vitality of space, he said.

Among the comments from the guest book at Nakasone's show last fall at the Graduate Theological Union, Berkley, California: "These are so beautiful … have opened my eyes to a new kind of artistic expression of humanity." Cindy Pinus, GTU student.

The exhibition is presented by the SFA School of Art and is sponsored in part by the Friends of the Visual Arts and Nacogdoches Junior Forum. Griffith Gallery is located in the Griffith Fine Arts Building, 2222 Alumni Drive. The show runs through Nov. 20. For additional information, call (936) 468-1131.

Nakasone will present a public lecture and demonstration at the Cole Art Center @ The Old Opera House at 3 p.m. on Saturday, Oct. 17. The lecture is free. 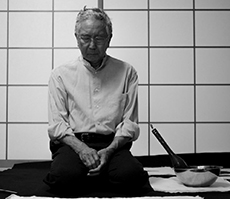