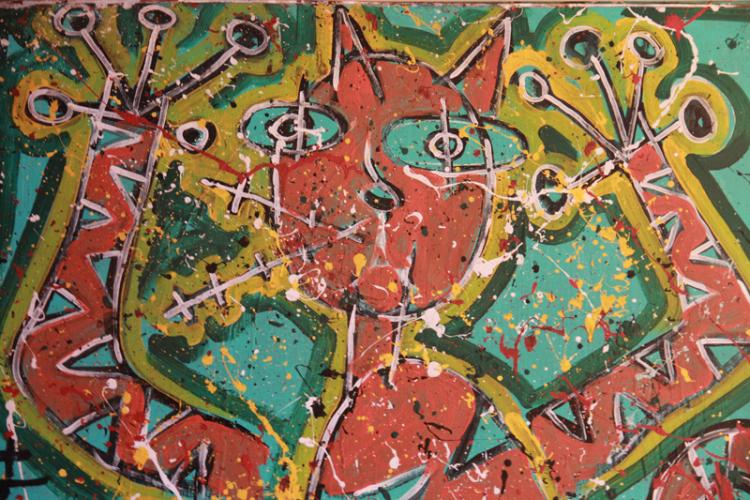 "Cat" by Moses Foster is among the artwork to be featured in the exhibition "Beyond the Academy: Contemporary Outsider and Expressionist Art" showing Jan. 22 through March 28 at The Cole Art Center.


NACOGDOCHES, Texas - The Stephen F. Austin State University College of Fine Arts and School of Art will present the exhibition "Beyond the Academy: Contemporary Outsider and Expressionist Art" showing through March 28 in Ledbetter Gallery in The Cole Art Center @ The Old Opera House in downtown Nacogdoches.

"Beyond the Academy: Contemporary Outsider and Expressionist Art" presents the works of several contemporary Texan artists whose art can be loosely defined as outsider or naïve in style, according to John Handley, director of galleries at SFA.

"Artwork of this genre is not new, having roots in late 19th and 20th century European and American art," he said.

According to Handley, the art critic Roger Cardinal first used the label outsider art in 1972, picking up on the term by the French artist Jean Dubuffet (1901 - 1985), who described artwork outside the establishment, including that of psychiatric patients, as art brut, or literally, raw art. This work greatly influenced Dubuffet's later work.

"Dubuffet's term art brut was rather specific," Handley said. "But today, the term outsider art is used in a variety of ways - to describe self-taught artists, as well as those working outside the accepted norms of realism, whether trained or not. In this way, outsider art's close relative is folk art - an equally difficult term to clearly define."

Among the artists represented in the exhibition are Haydée Victoria Suescum, whose style of painting is "characterized by anti-classical themes, intentionally discordant colors, impossible scales, rough brushstrokes, and a consistent sense of humor," said Mónica E. Kupfer, director of Fundacion Arte y Cultura and contributing writer to Art Nexus Magazine.

Outsider artist Lee Michael Peterson said of his work, "I want purpose. I, above all else, want to matter. My work is concerned with the pathetic state, but simultaneously a humorous one - completely hopeless, yet still hanging for dear life onto a sliver of fantasy."

The American Folk Art Museum in New York is currently traveling a large exhibition of outsider art, which will come to the Amon Carter Museum in Fort Worth Oct. 10.

"Beyond the Academy: Contemporary Outsider and Expressionist Art" is sponsored in part by the Nacogdoches Junior Forum and the Friends of the Visual Arts. The exhibition is a feature of the SFA College of Fine Arts' University Series. Admission is free.