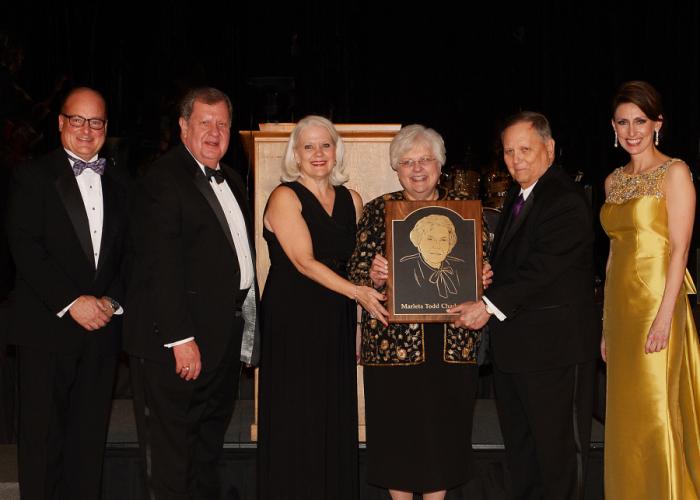 The late Marleta Todd Chadwick was inducted into the Stephen F. Austin Society in recognition of contributions made to Stephen F. Austin State University. Her children attended the 27th annual SFA Gala and accepted the award in her honor. Pictured are, from left, Jimmy Mize, chair of the SFASU Foundation Board of Trustees; David Chadwick, Carleta Sandeen and Martha Lou Scott, children of Chadwick; Dr. Baker Pattillo, SFA president; and Jill Still, vice president for university advancement.

Philanthropic contributors to the university are recognized by induction into one of three societies: the Fredonia Society, the Thomas J. Rusk Society and the Stephen F. Austin Society. The cumulative levels of giving range from $100,000 to $1 million or more.

This year's Gala honorees include Jimmy W. Murphy and the late Marleta Chadwick, who were inducted into the Stephen F. Austin Society. The Charles and Lois Marie Bright Foundation was inducted into the Fredonia Society.

The annual event included a cocktail reception, a candlelight dinner and dancing with entertainment provided by Blind Date, a group of accomplished musicians from Austin who performed hits including rock, jazz, country and hip-hop.

Jimmy W. Murphy is an insurance executive who resides in Houston. He played football at SFA and earned his bachelor's degree in physical education from the university in 1956. He later attended Sam Houston State University, where he received his master's degree in education in 1959.

After an injury forced his retirement from professional football, Murphy coached high school athletics in Houston before joining the team at Lincoln Liberty Life.

Murphy was named to SFA's Athletic Hall of Fame in 1976 and received the SFA Alumni Association Distinguished Alumni Award in 1987. He served on SFA's Board of Regents from 1995 to 2001, where he served as chairman for two successive terms. In 1998, the university named the Jimmy W. Murphy Wellness Center in his honor.

Murphy has supported athletics, the Lumberjack football program and scholarships at SFA.

The late Marleta Todd Chadwick had a heart for giving and sharing with others. Chadwick was an active member of the First Baptist Church in Center, where her husband Carroll served as pastor until his death in 1973. After Carroll's death, Marleta continued to serve the church. Much of her ministry was connected to her kitchen, where she enjoyed preparing meals for large and small groups alike.

In addition to her numerous church activities, Chadwick was a member of the Center Garden Club, the Women's Reading Club and the Center Music Study Club. Her contributions frequently included service as a judge at flower shows and home demonstration contests and as a presenter at various organizational programs.

The Charles and Lois Marie Bright Foundation provides assistance to duly-qualified public and private foundations and charities, as well as governmental organizations located primarily in Nacogdoches County for the purpose of providing relief for the poor and disadvantaged; construction and maintenance of public buildings, monuments and works; the advancement of education and science; and prevention of community deterioration.

Charles and Lois Marie married in 1967. Charles owned and managed Bright Coop, a manufacturer of live-haul poultry transportation equipment, until his death in 2013. Lois taught public school in Nacogdoches until her retirement and later owned and operated an antique business until her death in 2006.

An avid supporter of organizations that promote the preservation and restoration of properties that support tourism and the recording of Nacogdoches history, Charles gave his time, service, leadership and financial support to help create the Plaza Principal, Main Street Historical Light Project and the monument honoring the veterans of the Battle of Nacogdoches.

The Charles and Lois Marie Bright Foundation has been a supporter of the College of Fine Arts and the Student Financial Advisors program in the Nelson Rusche College of Business.

The faculty awards presented during the Gala recognize innovation and excellence in teaching and research. Dr. Eric Jones, associate professor of exercise physiology and human performance in the James I. Perkins College of Education, is the recipient of the 2015 Faculty Achievement Award for Teaching. Dr. Christopher Comer, professor of forest wildlife management in the Arthur Temple College of Forestry and Agriculture, earned the Faculty Achievement Award for Research.