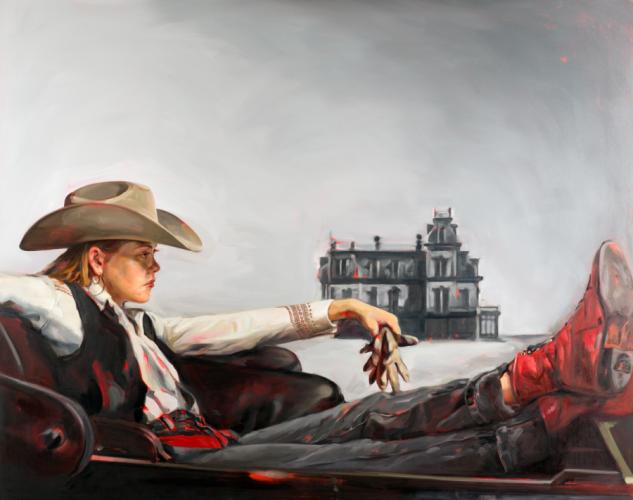 Felice House's "Julia Dean in 'Giant'" is among the works featured in the "Re-Western" exhibition showing March 25 through May 2 in Griffith Gallery.


NACOGDOCHES, Texas - The paintings and sculpture of Felice House and Dana Younger will be featured in the exhibition "Re-Western" showing March 25 through May 2 in Griffith Gallery on the Stephen F. Austin State University campus.

Hosted by the SFA School of Art, the exhibition "views 'The West' through a post-modern lens that both challenges and honors this most American of genres," according to the artists' statement.

Through painting and sculpture, husband-and-wife artists Younger and House ask the audience to re-evaluate the archetypes, mythology and values of "The West" while reveling in its richness.

"Simultaneously playful and incisive, Younger and House come together to offer a new look at the Old West," said John Handley, director of SFA art galleries.

In large-scale paintings, House, assistant professor at Texas A&M University, questions the male stereotype as portrayed through classic Westerns of Hollywood. "She projects contemporary women into iconic scenes from Western movies. By placing women in the heroic roles occupied by men, she points a finger at the limited access of women to power in the Western genre," their statement reads.

Through installation and sculpture, Younger, co-founder of Blue Genie Art Industries in Austin, looks at the cost of Western expansion. "His work juxtaposes established Western conventions with real people and damage associated with westward expansion. The sculptural processes of traditional bas-relief, computer aided machining and toy manufacturing all contribute to the dialogue," according to their artists' statement.

The painting portion consists of seven large-scale paintings re-casting women in the starring roles of classic Western movies. Sculptures included are "The End" series, which is a set of computer-generated bas-relief sculptures referencing the end titles of Western movies. Hand-sculpted and cast bas-relief portraits of American presidents wearing Lone Ranger masks make the "Legends of the Lone Ranger" series. Finally, "The Feast" is a rustic table and three chairs piled with bison skulls, plaster six-shooters and rope.

An artists' reception will be from 5:30 to 7 p.m. Wednesday, March 25, in Griffith Gallery. Admission to all exhibitions and receptions is free.

"Re-Western" is sponsored in part by the Nacogdoches Junior Forum and the Friends of the Visual Arts. Griffith Gallery is located in the Griffith Fine Arts Building, 2222 Alumni Drive. For more information, call (936) 468-1131.