Recital to feature saxophone, piano works from countries around the world 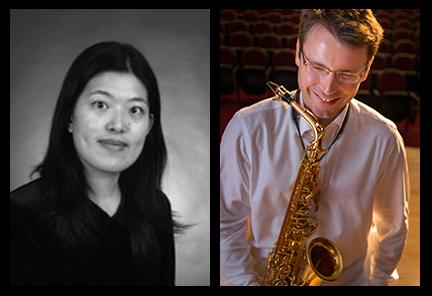 
NACOGDOCHES, Texas - Dr. Nathan Nabb, professor of saxophone at Stephen F. Austin State University, will perform selections from his upcoming performance tour of Taiwan and China when he presents a recital at 7:30 p.m. Thursday, March 26, in Cole Concert Hall on the SFA campus.

Collaborating with him on piano is Dr. Chialing Hsieh, faculty piano accompanist at Morehead State University. The two are longtime duo partners, performing together regularly since 2005. They will present pieces by David Maslanka, Takashi Yoshimatsu, Richard Lavenda and Piet Swerts.

Maslanka's Sonata for alto saxophone is considered to be a major work for the instrument and a mainstay in the saxophone repertoire, according to Nabb. "A champion of the saxophone, Maslanka writes works very large in scope, often highlighting the full range of its expressive and technical capabilities," he said.

Lavenda's "Rhapsody Tropes" is the newest work on the program and is for solo tenor saxophone. Written for a former bass clarinetist and saxophonist with the Houston Symphony, Richard Nunemaker, this piece explores the lyrical, expressive capabilities of the instrument, Nabb said.

Closing the concert with "Klonos" by Swerts, Nabb says "'Klonos' is a very exciting and technically demanding concert closer, which first became popular as an imposed piece in the Adolphe Sax competition in the late 1990s."

Hsieh has appeared as an active solo and collaborative pianist with a large range of repertoire for solo, instrumental and chamber music recitals and concerts in the U.S. and Taiwan. She has performed as a soloist in Taiwan, Austria and the United States.