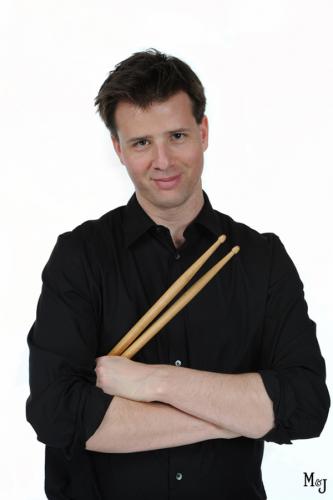 The program also features "Conversation" by Akira Miyoshi, "XY" by Michael Gordon and "Warm It Up" by Thomas Osborne.

"'Warm It Up' was written for me while the composer and I were both graduate students at Rice University," McClung said. "I was already learning a piece of music written for four toms, two bongos and a bass drum, and Tom was kind enough to write a piece for the same instrumentation. Tom was also apparently zonked out on cold medication when he wrote it, which explains some of the more non-traditional elements of the piece."

"Marimba Phase" is a study in slight shifts of timing, McClung explained. Reich encountered the idea of phasing when he was using two reel-to-reel tape machines to play the same recording.

"Due to the slight differences in play-back speed, the machines started in unison but began to separate gradually, causing unexpected melodic and rhythmic patterns to emerge," he said.

Miyoshi's "Conversation" is an early piece written during the 1960s when the marimba became popular in Japan, generating a wave of new solo marimba compositions by Japanese composers. These still make up a large part of the core marimba repertoire, McClung explained.

McClung has performed with a wide variety of prestigious ensembles throughout the United States, including the Houston Grand Opera, the Hawaii Opera Theater, the Spoleto Festival Orchestra, the Hanover Chamber Orchestra, the National Repertory Orchestra, the Civic Orchestra of Chicago, among others, plus the symphony orchestras of Arkansas, Austin, Corpus Christi, Hong Kong, Honolulu, Houston, Kentucky, Lexington, Maui, Phoenix, San Antonio and Victoria. He has played on the national tour of a Broadway show, a steel drum concerto with the Kentucky Symphony and jazz vibes with the Rusty Burge Quartet. As a winner of a Presser award, he studied for a summer with the Master Drummers of the Ewe tribe in Ghana, West Africa. McClung holds an engineering degree from the University of Cincinnati and a Master of Music degree from the Cincinnati College-Conservatory of Music. He is the recipient of the first doctoral degree ever awarded in percussion performance from the Shepherd School of Music at Rice University.